SAN FRANCISCO, MobileFocus, CTIA — Here at the CTIA mobile phone show, Archos is showing off a pair of brand new big-screen, low-cost tablets to challenge the iPad that have a secret weapon in the war against Apple – Adobe’s Flash.

The Archos 101 Internet Tablet has a 10-inch screen and comes in two configurations that are considerably cheaper than the equivalent iPad. The 8GB version is $299 — $200 less than the cheapest iPad — and $349 for a 16GB model. It runs on Android, Google’s mobile OS, and an ARM Cortex A8 processor. Archos also demoed the smaller Archos 8, with a 7-inch screen, which will shortly go on sale for $199.

The Archos tablets are the first in a wave of  iPad challengers that will come out early next year from a host of companies, including Dell, HP, Samsung and HTC.

Asked what distinguishes the tablets from the iPad, an Archos spokesman said it was the design and the ability to run Adobe’s Flash.

“It’s the design,” said Archos executive Frederic Balay. “And it has Flash. If you want to play Flash games or stream video from ESPN.com, this is what you need.”

The 10-inch Archos 101 tablet is 10 % smaller and lighter than the iPad, Balay said, and it comes with a built-in stand that pops out of the back.

The tablet is certainly well made. It has a nice, solid feel. The screen is big and bright and the Android-based OS is quick and responsive.

I was impressed with the hardware but didn’t get a chance to check out Flash performance. Archo is a French consumer electronics company that is perhaps best known for selling one of the first MP3 players, the Archos Jukebox. It was also one of the few companies to offer media players that presented a credible challenge to the iPod. 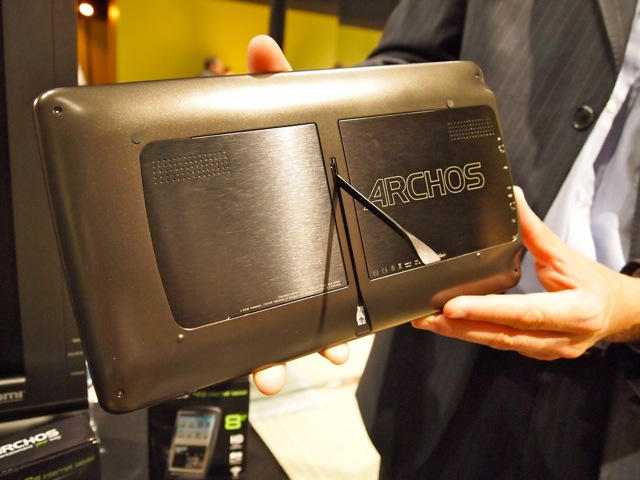