Little more than a week after Apple started shipping their all-new AppleTV, Google announced that they too would join the home entertainment party and offer a TV service of their own. It’s iOS vs. Android all over again, but this time the battle’s in your living room, not in your pocket.

The first product to offer Google’s new TV service is the Logitech Revue. It’s a black set-top box, just like you’d get for AppleTV, but it’s not as pretty, obviously. So, let’s take a look at how the two devices compare.

Here’s a comparison chart that compares the features and technical specifications of the two devices:

The hardware specs for Logitech’s Revue certainly look pretty nice. The device runs a slightly faster processor – the same one used in many Netbooks on the market – and boasts a whopping 4GB of RAM. It’s also home to dual HDMI and dual USB ports. Whilst these features will come in handy when it comes to running apps, I have to question whether some of them are a little unnecessary in such a device, and whether they’ve just been crammed in to look good on paper.

The new AppleTV features Apple’s A4 chip, which has already impressed us all with its excellent performance in the iPad and the iPhone 4. As usual with an Apple product, the device is small, sleek and sexy, and will blend in nicely with the rest of your home entertainment devices. Logitech’s Revue is a little larger, and it’s nowhere near as pretty. 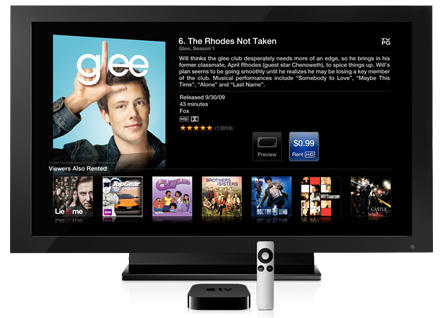 Google has tried to rope in every content source it can for Google TV: it boasts services like Netflix, Pandora, Napster and Amazon Video on Demand. Apple has kept it simple and provided customers with the choice of purchasing content through the iTunes Store, or by renting the latest blockbusters from Netflix through a simple user interface.

Google TV runs its Android operating system, which should be nice and reliable to begin with, until developers start releasing their own apps in to the open market. With no regulation, it won’t be long before you begin to stumble across poorly made applications that can make the O.S. buggy and undependable, as it often has done with the Android system on smartphones.

AppleTV’s OS and user interface has been around a while now, so many users will already be familiar with it. It offers simple to navigate menus, easy access to your content, and complete control through the minimalistic remote control, or Apple’s excellent Remote application for iOS. 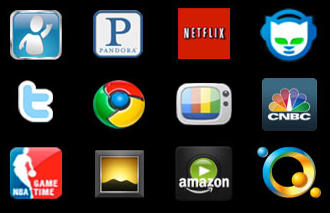 One of the deal-breakers for many customers will be apps. Google will be releasing an SDK for developers to create their own applications for the service that will give users access to a whole range of new services and games. AppleTV is currently lacking this feature, however, there has been lots of talk of an App Store coming to the device.

Another nice feature that the AppleTV is currently lacking is a web browser, whereas Google TV has Chrome built-in. It also boasts a Twitter application for those who want to to tweet from their TV, and it supports flash, something that we can safely rule out of ever officially appearing on Apple’s device.

One of the new AppleTV features is AirPlay, which allows users to seamlessly stream content from their iPad and iPhone to their TV. You can start watching a movie on your iPad in the kitchen, then continue from where you left off on your TV when you enter the living room. Google TV contains a similar feature that allows you to “Fling” what you’re watching on your Android device to your TV.

Each device has its strengths and excels in individual areas; Google TV boasts more content sources and applications, whereas AppleTV has a remarkable operating system and access to the popular iTunes Store. It all boils down to user experience, and which device will better suit you. Those used to AppleTV’s simplistic user interface and familiar features may find Google TV slightly overwhelming. With it’s numerous content sources and long list of OS features, the average user looking for simple home entertainment may find it a pain.