Apple’s tiny new Apple TV packs one heck of a punch in a very small package — Netflix! Youtube! $0.99 TV shows! It’s dead easy to set up, absolutely tiny in size, and a pleasure to use. And it’s ridiculously priced at only $99.

On the other hand, iTunes’ movie selection still sucks; and the Apple TV won’t play nice with popular internet video formats like DivX or Avi.

Still, this pint-sized box is now based on iOS, and Apple may yet try to turn its “hobby” into a real business by adding apps that feature new content channels, communication tools and maybe even games. If so, this Apple TV may have a very good future. The hardware is certainly ready and it is based on the same technology as the iPhone, iPod touch, and iPad.

If Apple opens up Apple TV to apps like it did eventually on the iPhone it could be unstoppable. Jailbreaking might just do that before Apple is ready to offer this feature.

Read the full review below so you can decide if this Apple TV is for you.

What is it? The new Apple TV is Apple’s revised idea about how to bring content to your TV screen. It now offers a new rental system that you’ll be able to use to access new TV shows for $.99 and HD movies for $4.99 (you’ll pay a dollar less for older movies). You’ll occasionally have access to new releases the same day that their DVD counterparts hit store shelves, and if they are available for streaming from Netflix you can get them that way too. The Apple TV supports the Watch Instantly service from Netflix, which is fully integrated into the Apple TV’s version of Front Row.

Streaming is what Apple TV does best. You can stream content from your home desktops and notebooks without any effort at all. A new feature called AirPlay promises to allow you to wirelessly push video and audio directly from your iPhone, iPod touch, or iPad (We’ll have more to say about this in another post). All of these features are just so simple to use that you’ll have content on your TV before you can say, “Steve Jobs.”

What’s good about it? Forgive me for repeating myself, but I cannot get over how pint-sized the new Apple TV is. The picture below shows it sitting on top of my Magic Trackpad, which is actually bigger than the Apple TV. I’m always taken in my tiny things that can do a lot — probably because I still remember when electronics were big — as in really big. 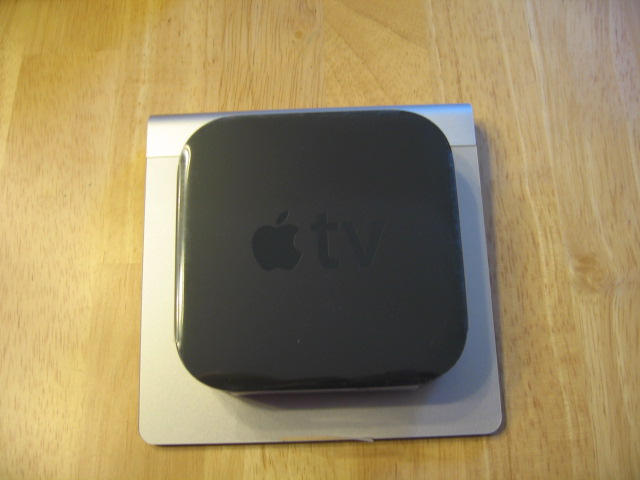 Minimal is in and that is what you can expect of the new Apple TV, which doesn’t ship with a hard drive installed. The items that come in the box include the Apple TV, Apple Remote, power cord, and manual (not pictured are the Apple warranty card and stickers). 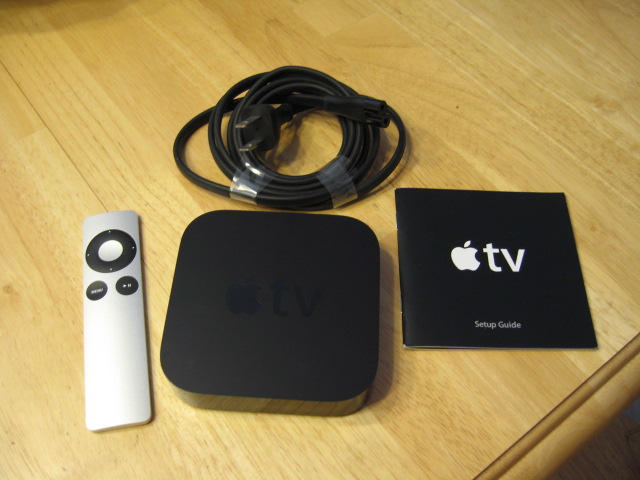 The Apple TV itself is pretty minimal — and so are the ports on the back. There is no on/off switch. A white LED on the outside front is the only indicator to show it is doing something — except what you see and hear on your TV, of course. The ports include only the ones you really ever need:  power, HDMI, Optical Audio, ethernet, and HDMI. Underneath the HDMI port is a micro-USB port that the manual states is for “service and diagnostics. ” I’ll bet it does a lot more, but right now I haven’t had time to experiment with it.

I was able to configure and setup the Apple TV without cracking the manual open and I’ll bet you’ll be able to do so also. It was like most Apple products — easy to get going in the least amount of time.

However, configuring it with the Apple Remote wasn’t that exciting, especially when I had to set up access to my Wi-Fi network using the on-screen keyboard. Therefore, I recommend that you get a copy of Apple’s free Remote app for the iPhone, iPod touch, or iPad. Configure it to access your Apple TV so that you can use the app’s virtual keyboard to set this stuff up. Seriously, that app is the way to go. If you don’t have it go get it now and then come back here and read the rest of my review.

If you owned the previous-generation Apple TV or you have used Front Row for any amount of time then you will feel right at home with how the software and content is presented. The interface features a navigational menu of featured content along the top and the sources for the different content: Movies, TV Shows, Internet , and Computers below that menu. You navigate around using the Apple Remote or the Apple Remote app. The last item on the navigational menu is the Settings menu, which you use to configure networking, checking for firmware updates, etc.

I was anxious to see how well Netflix was supported so I immediately made a beeline to the Internet menu and configured access to my Netflix account. I was impressed by the fact that I did not have to activate my Apple TV on a Netflix web page, which I’ve had to do for other devices. The Apple TV did it all automatically for me after I entered my Netflix account credentials. I was streaming my first movie in only a few minutes. It was even one that I had not finished watching and it let me pick up where I left off. Nice! On top of all this Netflix was integrated into the Apple TV interface so well that it’s a match made in heaven as far as I am concerned.

You can rent content easily on the Apple TV and Apple gives you 48 hours to watch TV episodes, but only 24 hours to watch a movie. The clock doesn’t start until you actually start watching it. If you leave it alone in your queue it will sit there unwatched for up to 30 days. I find the 24  vs. 48 hours difference to be a real puzzle, but I never really understood movie companies anyways and I’m sure they had something to do with these weird rules.

Finally, you have access to the old internet standbys if you are bored: YouTube, Podcasts, MobileMe, Flickr, and my favorite: internet radio. If you are interested in photos you can look at photo slide shows and browse photos on any connected computer. Pretty basic stuff, but still nice to have accessible on the TV.

What’s bad about it? The first, biggest and worst thing about the Apple TV at launch is the channel selection for TV content. Right now, Apple is partnered only with ABC, BBC, Disney and Fox. Apple has hinted that there will be more partners, but some of the other TV production companies aren’t interested in Apple’s terms. So it remains to be seen if we’ll see them hop on board the Apple TV train anytime soon.

Also, the Apple TV isn’t very friendly to non-Apple content. Sure, it will play MP4, M4V, or MOV files, but if you are thinking about DivX, AVI, or any other popular format — forget get about it. We’ll be stuck in this rut until the Apple TV is jailbroken or Apple offers apps that open up new features.

Lastly, users are not able to purchase content on the Apple TV and retrieve it later whenever we feel like it from the cloud. It is technically possible to provide this feature, but why Apple decided to stick to the rental only model is anyone’s guess. Perhaps it are still waiting for that huge data center on the East coast to come online? After all, they’ll need plenty of room to store all my Star Trek movies and TV shows.

Ironically, on the day Apple proudly announced $.99 TV show rentals, Amazon was touting TV show purchases for the same content for the same price. Ouch. So I’m wondering when Apple will catch up, since I think people are still inclined to buy versus rent. I know I am more interesting in buying than renting.

Minor annoyances are the cramped Apple TV Remote which is insanely minimal in design with a limited number of buttons: menu, play/pause, and a four-way rocker for moving around the menus and making selections with its center button. It’s pretty, but frankly I’ll be finding something to replace it before the weekend gets here. My hands are just too big to work the buttons comfortably. Luckily it looks like the settings menu has a feature that will allow me to change the remote to my Logitech Harmony One. The included Apple Remote will end up in a drawer somewhere I’m sure.

The Apple TV has beautiful output at 720p and the sound is pretty good too for something so small. But Blu-ray enthusiasts will be sad to find out that the Apple TV does not support 1080p video.

Conclusion: I cannot whole-heartedly recommend Apple TV even though it is easy to use and fairly inexpensive for $99. However, if you are someone who is interested in something easy to set up and use, and gives you access to mainstream content, it is worth a look.

On the other hand, if you are looking to replace your cable TV, you’ll need to keep looking. The Apple TV won’t be replacing my cable TV anytime soon due to the limited number of partners offering content for it. I hope that changes because I’ve been looking for a good excuse to get rid of cable TV. I’m sure many of you are thinking the same thing.

Finally, the Apple TV still seems to be a hobby for Apple, but since iOS is hiding inside that could all change. Apple could turn Apple TV into a business if it offered apps that expanded the available content into new channels, weather apps, etc.  Time will tell, but if that happens I think Apple TV will take off.  If Apple concentrates on making this happen and adds more content then the pint-sized Apple TV will pack quite a punch.

Compatibility: High-definition TVs with HDMI and capable of 720p; HDMI and Optical Audio cables not included.