About two weeks ago, Steve Jobs told a college journalism student to “leave Apple alone.” That e-mail exchange left a bad taste in people’s mouths; it was pretty rude. But that hasn’t been my experience at all.

I also wrote to Jobs about the same time complaining about the problems I’ve had with my iPhone 4. But instead of being told to leave Apple alone, Steve got his people right on it.

I received a phone call from Steve’s Corporate Executive Relations (his A-Team of executive ninjas who get shit done), and a week later, I’ve got a new iPhone 4 after receiving extra special customer service.

I’ve had continual problems with the iPhone 4’s proximity sensor ever since I got my first iPhone 4 on launch day back in June. Cut a long story short, I’ve spent weeks dealing with Applecare and Genius Bar Geniuses, and three replacement handsets. It’s been a frustrating and irritating experience. Finally fed up, I sent the following email to Steve himself.

I’m loosing faith in Apple over all the iPhone 4 drama. I think that your company’s disguising of the phone during testing resulted in real world testing failures. I’m on my second iPhone 4 and the proximity sensor still isn’t working even after the 4.1 update and various troubleshooting including reset all settings, etc. I’m not sure that going to the Genius Bar again per Applecare is going to make a difference on a third device. No confidence in Apple getting it right.

This problem is by far worse for me than the antenna issues. Please find a permanent fix for this.

To my surprise, I received a phone call the following afternoon from a lovely lady on Apple’s Corporate Executive Relations team. I had a pleasant conversation with Steve’s representative, who I won’t name out of respect for her privacy. She was calling on behalf of Steve himself, who she said was concerned about the experience I was having with my iPhone 4. He wanted things to be right, and she was calling in response to my e-mail. I was a bit surprised, since I had written before about other topics and hadn’t really expected a response. 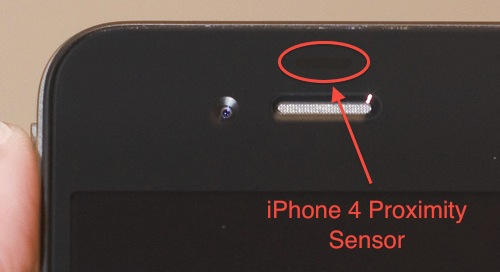 However, since I was calling as a customer with a real problem, versus someone trying to get their journalism homework done,  I got a response. I shouldn’t have been so surprised. After all, Apple and its customer satisfaction is the best and a model everyone else needs to consider for their own businesses.

I was asked a bunch of questions about how I use my iPhone 4 — from how I held it to whether or not I had hair in the way, which seems to be a common cause of proximity sensor trouble.

“Uh! No on that one!”  I told the Apple representative. Just check out my author profile below and you’ll see why I said that. Needless to say we both got a chuckle out of that, but we laughed harder when I mentioned that I also made sure my ears were clean. No dirty ear canals here — right Mom?

Following this first battery of questions I was connected with a gentleman at Applecare who I would work directly with to resolve the problem. We talked about the questions I was asked initially and about the troubleshooting I’d already performed. I’ve observed the proximity sensor not working during testing. We talked about the pros and cons surrounding the tests and troubleshooting I’d already tried.

We opted out of doing them again. The iPhone 4 is a complex device, but is actually very easy to troubleshoot. I’d covered all the bases already.

I left that call with an assignment — I was to complete another DFU restore of my iPhone 4 and try using it afterwards. The only difference was that once that restore was completed I unplugged the iPhone 4 after it was activated and waiting at the restore from Backup screen in iTunes 10.

I took the iPhone 4 and began testing it immediately. I had no apps or data loaded on it. For all practical purposes, it was as if it just came out of the box. I made some phone calls and the proximity sensor was still not working. But the bottom line is that I was using my iPhone 4 no differently than I did the iPhone 2G, 3G, or 3GS.

My second iPhone 4 is now on its way to Apple HQ in Cupertino. Apple’s engineers are going to run a full diagnostic on it. Meanwhile, I picked up my third iPhone 4 this past Saturday and the proximity sensor seemed to be okay.

However, this replacement unit was suffering from a different, unrelated problem with the SIM and displayed this message: “Fixed Number Dialing Activated.” No one at either Apple or AT&T could explain why it was happening. I know that it has something to do with restricted dialing configurations for other cell phones usually, but I wasn’t aware of iOS supporting this feature. So another trip to the Apple store on Sunday and I’ve now got iPhone 4 number four, because I could not make or receive phone calls on number three.

I hope that my new iPhone 4 solves the proximity sensor problem, but I have doubts. I’m still bothered about how Apple disguised the iPhone 4 during field testing (they disguised it to look like a 3GS) and wonder what effect that might have had on the test results. I also think that the proximity sensor problem has made my iPhone 4 even less useful than the problems reported about the antenna. I was muting people, ear dialing, or placing people on hold more than I was dropping calls. I think that says something about the whole thing.

I’m grateful for Steve Jobs’ response to my letter and Apple’s extra attention to my very real problem. That is what I’ve come to expect from Apple. I think that no matter what, one way or another, they will make it right for me and you. The question is when and how?

Unfortunately, Apple doesn’t have a definitive answer for everyone right now. However, if your iPhone 4 proximity sensor or something else isn’t working then Apple advised me to tell you to call Applecare to get it fixed. Seriously, call them, they care and want to make it right.

Here’s hoping that the iPhone 4 that I have now finally works until it is time to replace it with an iPhone 5. I’ll know for sure in a few days, but it looks promising so far.