Here’s iTunes 10, and the first thing you’ll notice is a sleeker, cleaner look. There are fewer lines, there’s a little more space. The application is still bloated with far too much stuff, but at least it looks a little less crowded now.

Let’s start at the top, and those new close/minimize/maximize buttons.

The combined title bar/ toolbar is narrower than before. This has been done by removing what’s usually called the title bar. So the close/minimize/maximize buttons are twisted through 90 degrees, and the “iTunes” title is gone altogether. Apple’s own Human Interface Guidelines have this to say about title bars: “All windows should have a title bar even if the window doesn’t have a title (which should be a very rare exception). In Mac OS X v10.5 and later, all windows display the title bar unified with the toolbar, if a toolbar is present. The following sections describe the components of the title bar.”

There must have been a reason for the changes, which save a few pixels of vertical space. Perhaps it was to make room for the Ping sidebar icon further down. Who knows? It’s Apple’s party. 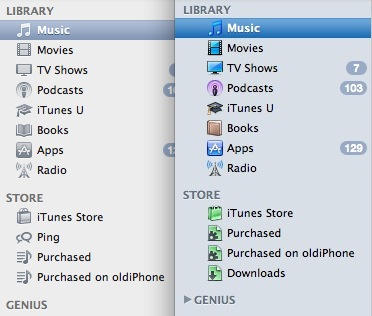 Now, the sidebar. It’s leaner than before, with monotone icons. They are a little crisper and cleaner than their predecessors, but the problem of overcrowding still remains. There used to be a triangle next to the Genius header, which you could click to show the Genius sub-menu items. That triangle has disappeared; now you have to hover your pointer over the Genius header, and a new Hide control will pop into view alongside it:

The same thing applies to the Playlists header, but doesn’t apply to the Library and Store headers. One rule for some, another for others.

The new look even stretches as far as the preferences window:

… which suddenly looks different to just about every other preferences window in OS X. It’s not a big deal, I know. People will still be able to use it just fine. But it’s a little deal. It’s frustrating for users and developers when Apple goes to such lengths to say “You should do it this way,” then promptly does it that way. Just because it can.