Animated Knots by Grog is a great app that teaches you to tie all kinds of handy knots. This is the first app we’ve reviewed to earn five Black Turtlenecks using our rating system!

What It is: Animated Knots presents a list of knots that are arranged in categories that include boating, climbing, fishing, scouting, search and rescue, decorative, and household. It also includes important tips on rope care and safety – topics that could be life saving in some circumstances. It is important to take care of your rope, just like you would any other tool, so that it will take care of you when you need it. 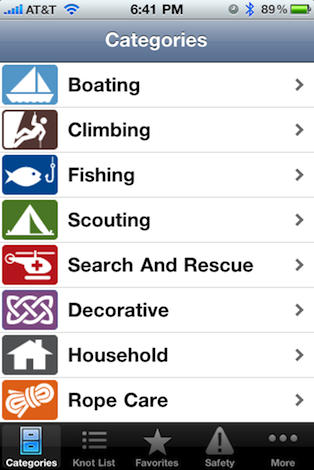 Why It’s Good: I went directly to the Knot List tab in the app and found a complete list of all the knots I could learn to tie with this app presented in alphabetical order. I selected a Bowline from the list and the app presented an animation of a red length of rope being tied into a Bowline. I could step forwards or backwards in the animation to see each step as many times as needed. The accompanying text explained what needs to be done at each stage in order to create a knot. The Bowline was completed in 10 steps. I marked this one as a favorite so that I could refer to it again later using the Favorites tab on the apps main screen. 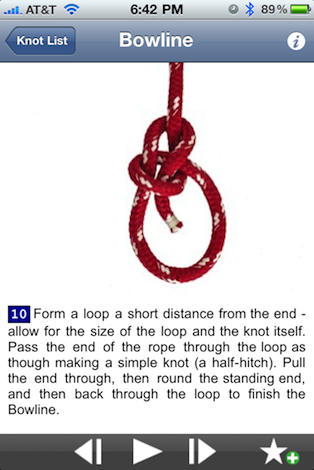 If you are curious about uses, shortcomings, and a plethora of other information for a particular knot — just press the information icon on the upper right-hand side of the knot animation screen. I was quite surprised by some of the information I discovered about knots I’ve known how to tie for a long time. Definitely cool. 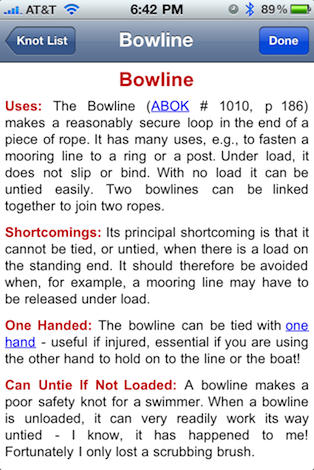 I’ll be the first to admit that I’m no expert with rope and that I only get by with the basics that I need. So I went to two of my friends — one a retired Fireman from the Houston Fire Department and another who was in the U.S. Navy. I queried them for the names of knots they had to use in their respective jobs and was very pleasantly surprised that the app could teach me how to tie the knots they named. So now I have some basic training to be fireman or sailor, but still a long way to go for either career — I wonder if there is an app for that?

The source of the information in the app comes from a website with the same name. I like the iOS app version because it is portable and I can have the entire rope-tying reference with me, wherever I go. The app is easy to use and I cannot think of anything bad to say about it. If you find yourself tied up in knots over learning to tie knots, this app just will set you free to learn knot-tying the easy way.

People from all walks of life can learn to tie specialized knots the fun and easy way on their iPhone, iPod Touch, or iPad using Animated Knots by Grog.
[xrr rating=5.0/5]