I just got a sneak peek at Sonos’ upcoming iPad app — and it looks awesome.

Sonos sells wireless music players that make it easy to get multi-room audio around your house. Plug in a player in each room and stream music to each one (or the same music to all of them). Sonos’ products have won kudos for painless setup, ease of use, relative low-cost (you can spend a lot more) and innovation — this is the home stereo of the future.

Sonos is about to take it to the next level with a fantastic iPad app that makes digital music very easy — especially listening to online music services. Using the iPad as a big Wi-Fi remote control, you can play music from your iTunes library, thousands of online radio stations, satellite radio subscriptions, or online music services like Pandora, Rhapsody and Last.fm (and soon the fantastic Mog.com). 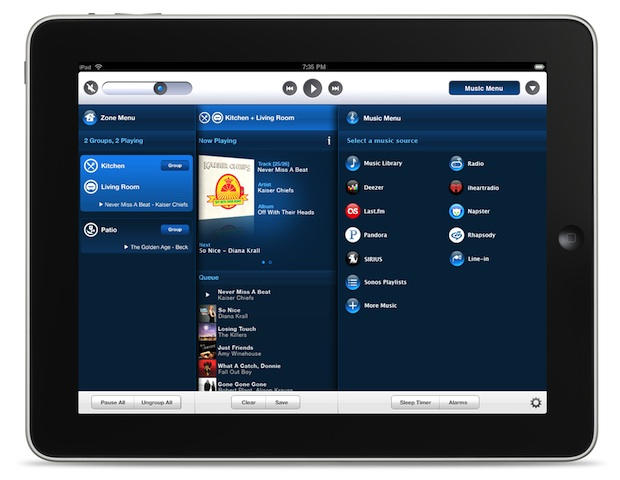 Using the iPad, Joni selected an album by David Bowie from her iTunes library (running on a Mac Mini she brought along). Selecting a track from the album, she dragged it onto a playlist for one of two S5 players she’d set up. Instantly the music started playing. It sounded great. The S5 packs some wallop, thanks to a built-in subwoofer.

Playing a different tune on the other S5 was as simple as dragging a track onto that player’s playlist. And a finger tap later, she was able to play the same track on both boxes (we pretended they were in different rooms), and then set them up as a stereo pair (same room).

The app closely resembles Sonos’ iPhone app (used to control S5 players) but makes great use of the iPad’s extra screen real estate. Instead of toggling between screens, the iPad app can show music sources, playlists and players all on the same screen.

I was very impressed and excited by the system. It looks awesome. I love internet radio and next-generation streaming music services like Spotify and Mog.com, which Sonos is reportedly looking at supporting shortly.

The iPad app should be available as a free download in late August. Here’s a video from Sonos showing the iPad app in action.