Apple’s reputation as the world’s best laptop maker took a serious hit in 2016, due to the new MacBook Pro’s adoption of USB-C.

In the latest brand rankings by Laptop Magazine, Apple’s slipped five spots as Lenovo and Asus surged to the top of the pack with their affordable and dependable wares.

Check out the full rankings: 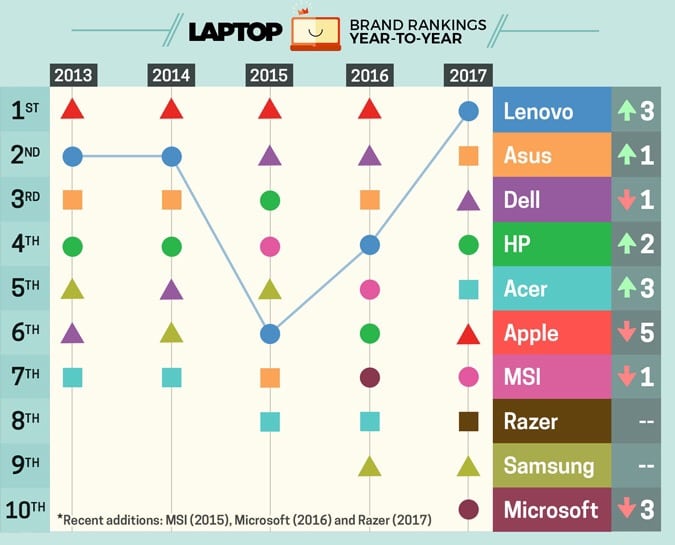 The folks behind the rankings credit Lenovo’s rise to its “groundbreaking technologies and vastly improved customer support.” Asus scored high points for value. Meanwhile, Dell somehow made the top 3 with its premium laptops and solid warranty coverage.

As for Apple, Laptop Magazine says using USB-C as the only port option really hurt the company’s reputation, because owners must carry around a bunch of dongles.

“The company’s MacBooks are slim, powerful and well-built, but you’ll need a pile of money and a bagful of dongles,” writes the magazine, before tossing Cupertino a bone. “The company’s support and warranty options are second to none.”

Apple released its new MacBook Pro with Touch Bar at the end of 2016. While many reviewers praised the new Touch Bar, some professionals panned the new machines for not having enough power.

In a surprise roundtable interview last week, Apple execs revealed the company is working on a new Mac Pro machine. Big updates are also on the way for the MacBook Pro and iMac lineups as well, so hopefully Apple will be able to recover the laptop crown in 2018.