Apple’s decision to drop support for 32-bit apps in iOS 11 later this year could kill about 187,000 apps, based on a new report that shows some old apps have been slow to catch up.

Analytics firm Sensor Tower estimates about 8% of all apps on the App Store will become obsolete. That small percentage may sound insignificant, but old games might be impacted the most.

Apple first started supporting 64-bit apps with the launch of the iPhone 5s in 2013. The company didn’t require apps to support 32-bit at the time. Then in February 2015 the company notified developers that all apps submitted to the App Store must be 64-bit compatible by June 2015.

iOS 11 is expected to be announced at the annual World Wide Developers Conference in June. Apple hasn’t said yet whether it will drop 32-bit support, but it seems likely to happen with iOS 11 to streamline the software.

Of the nearly 200,000 apps effected, games would take the biggest hit. Just over 20% of the 32-bit apps on the store are games. Education apps are the next biggest group accounting for about 10% of apps doomed to obsolescence.

The launch date for iOS 11 will likely be set in the fall, so developers still have time to get their ancient apps up-to-date if they want to keep users happy. 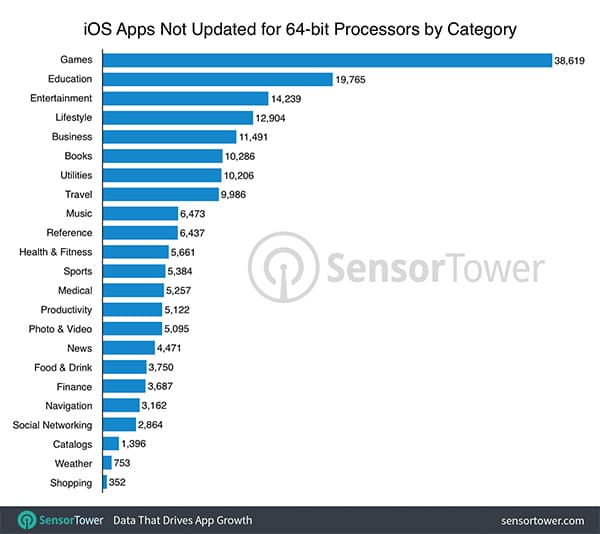