Konami’s latest offering features stunning 3D graphics that, together with fantastic player animations and a great attention to detail, make P.E.S. the best looking soccer game in the App Store, and one of the best soccer experiences on an iDevice.

As well as the traditional virtual control pad, players can also choose to use the new ‘true flow’ control system, which makes use of the accelerometer to provide tilt controls, and claims to provide players of all levels outstanding accessibility to the game – whether you’re a keen beginner or a soccer gaming guru. I’ve found however, that the tilt controls are pretty tricky to get used to, and for beginners the traditional virtual pad is the easiest control method. 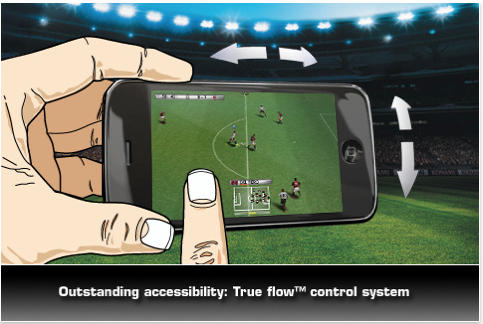 Game modes include a quick match option for those who fancy a quick kick about, a single player mode that allows you to play international cups, domestic cups & leagues, or you can choose to compete in the official UEFA Champions and Europa Leagues.

I’ve been addicted to the Champions League mode since purchasing this game and I think it’s brilliant. There’s certainly hours of fun to be had with the different game modes. I’m slightly disappointed at the lack of a multiplayer mode, as this kind of game is great to play with friends, however it’s early days and we may see this option introduced at a later date.

Pro Evolution Soccer has certainly lived up to its expectations and developers, Konami, have provided us with an outstanding soccer game that offers smooth, responsive gameplay and competes with top rivals like Fifa 2010 and Real Soccer 2010. With the lack of multiplayer mode however, P.E.S. isn’t quite the at the top of the league just yet and many customers are complaining of crashing and other issues in their iTunes reviews, which I’m sure will be ironed out with an update some time soon.