This is a guest commentary by Shawn Ahmed, a anti-poverty campaigner. It was originally published here.

Last week, Apple surpassed Microsoft to become the world’s biggest tech company. As someone who used to spell Microsoft with a dollar sign, I can’t believe what I’m about to say: this is a bad thing for the world.

The only thing I love more than Apple is what I use my Mac gear for: fighting poverty in developing countries. In this regard, unlike Microsoft & Bill Gates, Apple & Steve Jobs don’t seem to care much about poverty and global development.

Before starting this project, I really wasn’t aware of just how much Microsoft was doing in the fight against global poverty. I’m not even referring to Bill Gates and how he has used his own personal wealth to create The Gates Foundation.

As a company, Microsoft is hugely invested in fighting poverty. They partner with charities that keep aid workers connected during disasters, they invest in global health initiatives that save lives, they match employee donations, and much more.

And, as I learned after the earthquake in Haiti, Microsoft even has a disaster response team to provide assistance after natural disasters – with technology, equipment, & even funding. This is mind-boggingly unprecedented from a for-profit.

In fact, in the three years I’ve been doing this project, it seems like virtually every aid & development contact I’ve made in Asia, Africa, Europe, and the Americas seems to have (or knows of) someone who can help them from Microsoft.

The same cannot be said for Apple. In fact, to this day despite all the contacts I’ve made, I have yet to find a single person who knows anything Apple has funded or supported in the fight against global poverty.

In fact, when I started this project back in 2007, I placed a formal written request to see if Apple would help me through either lending or donating Apple software or gear. Their response? They don’t do that kind of stuff (see the letter from Apple below).

I was also very lucky to meet some high-ranking Apple employees & engineers during my trip to San Francisco late last year. Unfortunately they too confirmed to me that, with one exception not related to poverty, Apple simply doesn’t have any programs which focus on charitable giving.

Until that changes, Apple will never truly surpass Microsoft. 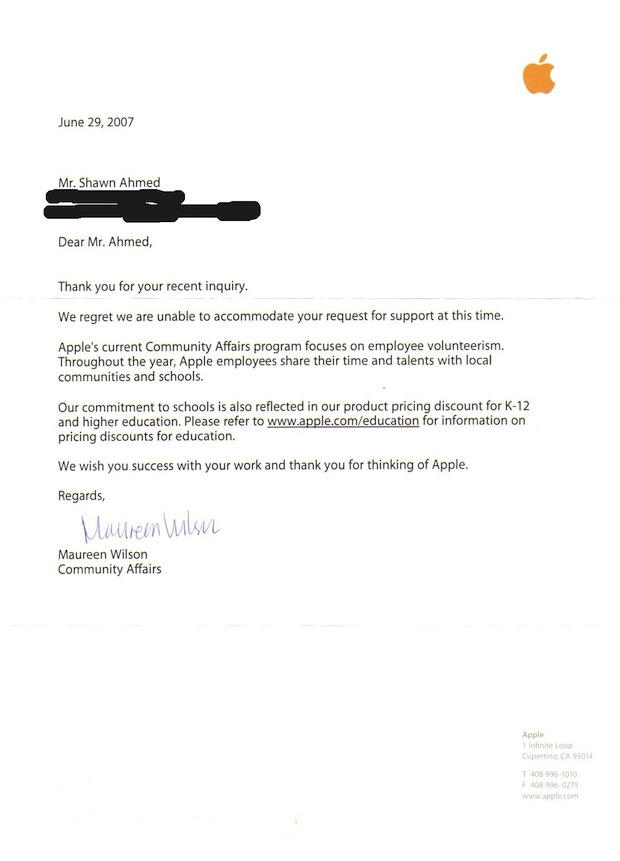