Don’t tell Tim Cook, but the perception of Apple is that it’s been lagging behind other tech companies like Google and Facebook when it comes to cutting-edge artificial intelligence research.

Things are unlikely to stay that way for long, however, since Apple is currently in the midst of a massive recruitment drive to hire machine learning experts for a variety of different posts throughout the company. 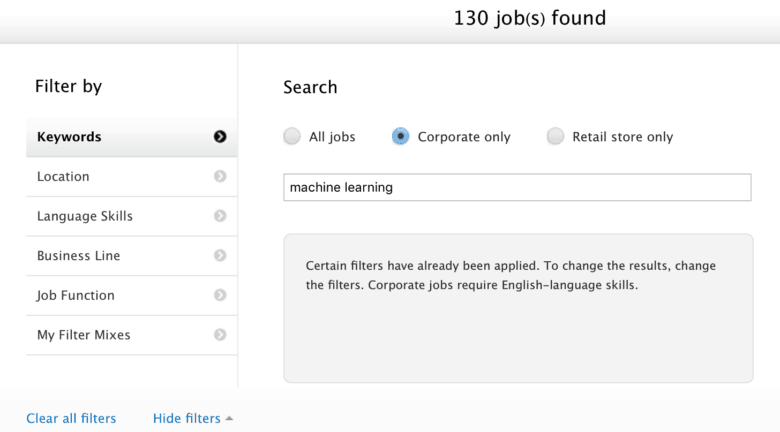 At present, a search for “machine learning” on Apple’s jobs page brings up 130 available posts, most of them based in the U.S. Machine learning, for those unfamiliar with it, is a subfield of computer science focused on creating algorithms that can learn from and make predictions about data.

Recently, Cook addressed the perception that Apple is behind some of its other rivals when it comes to AI during his in-depth interview with the Washington Post. Asked about what Apple can do to catch up, Cook said: “Let me take exception to your question. Your question seems to imply that we’re behind.”

But for a long time Apple was behind. As a company, it realized the value of exploring AI — and pioneering concepts like the Siri-style virtual assistant — dating back to the 1980s. Needless to say, this was years before Google and Facebook came along.

However, when the “deep learning” revolution began in the mid-2000s, Apple was not one of the companies willing to dive into hiring researchers.

Now it is. As a tremendous recent article by Steven Levy notes, Apple switched Siri’s learning system over to deep learning neural networks in mid-2014, leading to a noticeable increase in the service’s efficiency. Since then, as Levy wrote, Apple has begun using deep learning to:

… detect fraud on the Apple store, to extend battery life between charges on all your devices, and to help it identify the most useful feedback from thousands of reports from its beta testers. Machine learning helps Apple choose news stories for you. It determines whether Apple Watch users are exercising or simply perambulating. It recognizes faces and locations in your photos. It figures out whether you would be better off leaving a weak Wi-Fi signal and switching to the cell network. It even knows what good filmmaking is, enabling Apple to quickly compile your snapshots and videos into a mini-movie at a touch of a button. Apple’s competitors do many similar things, but, says its executives, none of those AI powers can pull those things off while protecting privacy as closely as Apple does.

Machine learning is a particularly big part of the upcoming iOS 10 and macOS Sierra, and there’s no doubt that Apple is looking to highlight its position as an AI pioneer — which is the reason it’s been opening its doors to journalists to talk about the topic.

Do you think Apple can catch up with its rivals when it comes to AI? Leave your comments below.