Leaked SIM trays purportedly manufactured for the upcoming iPhone 7 and iPhone 7 Plus hint at a new glossy black color option. The finish looks like it was inspired by the Mac Pro’s sleek cylindrical body that was first introduced in 2013.

The last time Apple gave us a glossy iPhone it was made of glass and stainless steel, and much more fragile than today’s aluminum unibody designs. But it seems that won’t be the case with the rumored “Space Black” iPhone 7.

A picture of new iPhone SIM trays obtained by Japanese blog Macotakara, which has a good track record when it comes to Apple leaks, suggests this year’s iPhones will be available in a glossy metal just like the Mac Pro. 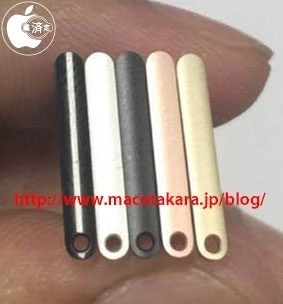 Contrary to previous reports, the existing Space Gray option also looks to be making a return, alongside the Silver, Gold, and Rose Gold colors we’re all familiar with.

There is no glossy black body to go along with this picture, so it might be a good idea to avoid getting too excited for this just yet. But plenty of recent reports have promised that Apple will add new color options to its iPhone lineup this fall.

We’ll know for certain on September 7 when the company holds its big iPhone 7 keynote.