WiFi operates in unregulated portions of the radio spectrum.  These frequencies are shared with things like microwave ovens, cordless phones, garage door openers and an increasing plethora of other WiFi devices.  What many WiFi networks face these days is like trying to tune in to a weak radio station in a busy city market.

This week a few tips and suggestions to try when things aren’t working.

Reboot Routers
This is basic but often effective.  When you’re having WiFi problems reboot (power cycle) the WiFi router or access point.  Unplug the power cord, wait 5 seconds, then reconnect. If you have multiple routers or wireless access points (WAPs) try rebooting all of them when problems occur.

On your computer, turning WiFi Off then back On should force the system to rescan for available networks.  On Macs, click on the Airport Menu and select Turn Airport Off, wait about 5 seconds, then reenable.  On iPhones, iPods and iPads go to Settings  –> WiFi and slide the switch to Off, wait a few seconds, then switch On.

Change Locations of Routers and Computers
Again very simple, but changes of just a few feet may be enough to make a difference.  Keep your router away from large metal surfaces like shelves, file cabinets and walls with metal studs, these can act as energy sinks and obstruct WiFi signals.

When I use my laptop in my car (parked, not while driving) I can get one or two bars difference in reception when I rest my MacBook against the steering wheel vs. putting it down on the passenger’s seat next to me.

A wire mesh latticework like that found inside old plaster walls and ceilings is even worse – this arrangement can create a shielding effect from RF energy (see: Faraday Cage).  This is a problem around Boston in old houses and apartment buildings.  You may need to put WiFi access points in each room to adequately cover such spaces.

Watch for Overheating
A WiFi router is a small radio transmitter operating at peak power, typically in a poorly ventilated box.  When operating normally many of them (especially Apple’s Airport Extreme) get toasty enough to keep your coffee warm.  If other equipment is placed on top of the router or is otherwise blocking vents things can easily overheat, causing all sorts of bizarre behavior.

When you’re having problems check to see how hot your equipment is, you may need to unplug power for a few minutes and let things cool down.  Place your WiFi gear on top of a stack when possible, and leave at least an couple of inches of space on all sides for ventilation.

Update Firmware
Vendors of routers, network cards, computers and handhelds often release firmware updates to their devices that can improve performance.  When you’re having problems it’s worth checking that everything is up to date; if not, apply available patches.  This is particularly true for new devices.

With firmware however, prudence is a virtue. Firmware updates have been known to introduce bugs to otherwise stable systems.  With dedicated network hardware I generally leave things alone unless there are problems.  As they say, if it ain’t broke don’t fix it!

Use a Larger or External Antenna
WiFi antennas are generally fairly small, a few inches long on the router (if that) and typically internal on your computer or handheld.  Reception can often be improved by using a larger or external antenna to boost signal-to-noise.

Some older routers offer removable antennas; old Linksys routers are a brand for which I see larger replacements available at local flea markets.  Apple provided this capability on their early “UFO” shaped Airport Extreme routers but that’s been removed from the current White Sealed Boxes.

On a desktop or laptop with a metal case, an external antenna helps tremendously.  Apple’s Mac Pro and PowerMac G5 models with Airport Extreme use a small T-shaped antenna which plugs into an antenna port on the back of the computer (if missing, replacements can be found online).

For laptops you generally can’t add different antennas to internal WiFi cards, but you can use a USB WiFi adapter, a PC Card or an ExpressCard WiFi adapter that sticks out from the computer a small amount.  These devices get the antenna outside the enclosure to help improve reception.

The truly desperate, or the proud geek, can also create a parabolic dish antenna using simple household items like vegetable strainers and wok accessories.  I’ve read that these work quite well – but you may be required to wear a tin foil hat before installation is approved.

Forget Previously Saved Networks
Software issues can cause problems even when reception is fine.  Macs and iDevices sometimes hiccup when joining previously visited networks.  This can happen when network hardware or encryption methods change but the network name and password remain the same.  Forcing your device to forget a previously saved network can help.

Inducing amnesia on the iPhone, iPad or iPod Touch can be a bit trickier.  You can’t see the network settings while WiFi is disabled, so your iDevice will be trying to hookup as you troubleshoot.  To get to the Forget This Network option, tap Settings –> WiFi, then tap the arrow next to your network name: 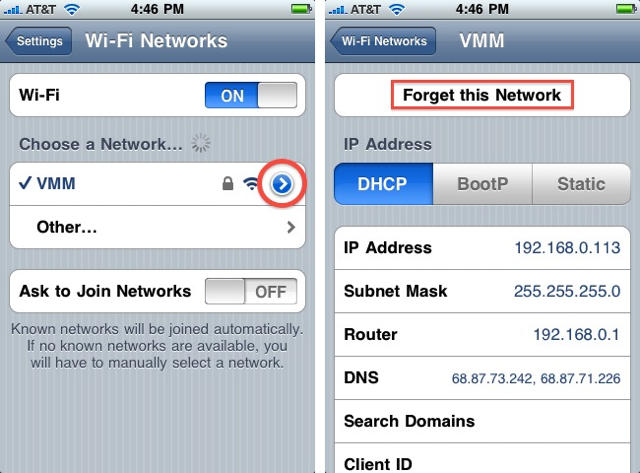 In my experience the Forget This Network button appears intermittently, sometimes there, sometime not.  Have other readers seen this behavior?

Change the WiFi Channel
With so many devices using the WiFi spectrum these days (both 2.4GHz and 5.8GHz bands), signal congestion is a problem in urban neighborhoods.  Changing the broadcast channel of your router might help.  Most modern routers offer an automatic mode, which samples local traffic and dynamically assigns a clear channel as needed.  This is usually worth trying first. 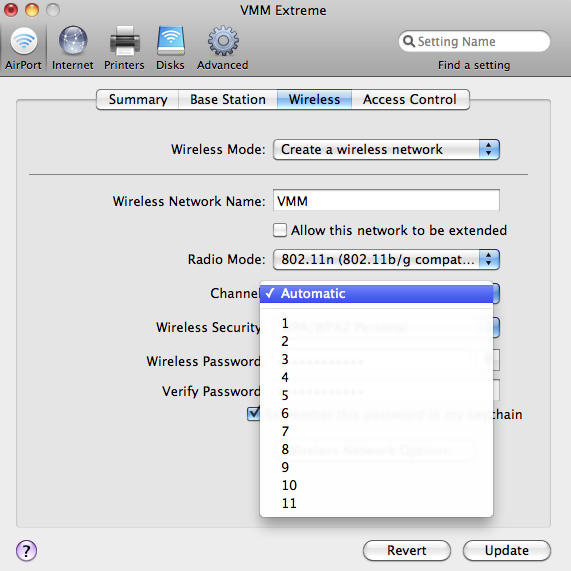 If that doesn’t work, use a WiFi traffic monitor like iStumbler on the Mac or a WiFi Finder app for the iPhone/iPad to see what’s going on in your area.  You may be amazed at how much traffic you see, far more than the Airport menu typically displays.  See what channels are used by surrounding networks, then choose something a few steps away from crowded choices.

Change Encryption Methods
Passwords on WiFi networks aren’t just used for login but also encrypt the traffic that is transmitted. Encryption methods include WEP, WPA, WPA2, etc.  WPA is stronger and preferred to WEP in most circumstances, but sometimes using a different encryption method in the router will allow troublesome clients to connect.

Older 802.11b equipment may not support WPA encryption at all, so if you have to connect with this gear (including some original Apple Airport equipment) WEP will be your method of choice.

Use No Password
Security Professionals will cringe, but the fewest connection headaches come with an open access point – no password or encryption.  Of course this presents a large security risk – an open WiFi network is like leaving a 100 foot ethernet cord dangling outside your window.  However, practical considerations sometimes overrule: have you tried explaining how to enter a 128 bit WEP key to your grandmother lately?

I don’t recommend using WiFi with No Password as your default (in some places this is now actually illegal), but in areas where security concerns or technical skills are low, and the risk is assessed and understood, using no password can be a viable solution.  Just make sure never to type any other passwords or any personally identifiable information over an open WiFi link.