Drivers tired of forking over cash to toll booths on the morning commute are getting some welcomed relief thanks to iOS 10.

Apple Maps didn’t get much stage time during the WWDC 2016 keynote earlier this week, but along with adding proactive route suggestions, Apple has also made it super easy to avoid any toll booths that might be on your route. 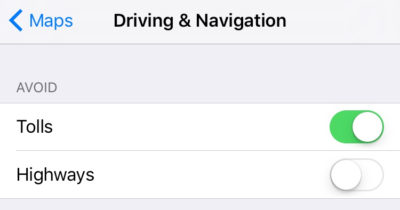 The hidden iOS 10 feature lets drivers choose if they want Apple Maps’ algorithm to avoid tolls or highways if you prefer some slower driving.

When you activate Toll avoidance, Apple Maps will give you multiple route suggestions, one or two without tolls along with one route option with tolls (if there are any in the area). All you have to do to activate it is go to Settings >> Maps >> Driving & Navigation.

The updated version of Apple Maps coming in iOS 10 gives drivers the ability to view pitstops along a route for coffee, gas and food. You can also book reservations for a restaurant, or request an Uber without leaving the app.

To get a closer look at what it’s like using iOS 10, check out our hands-on video: