We here at Cult of Mac receive a ton of email asking “What’s the best _____?” or “I just got a new iP___,  tell me what sweet apps I should purchase!” Though we try to cover the vast realm of the best of Apple products, software, and accessories we know that crowdsourcing it to you guys will give us some interesting results.

We’re posting questions on our Facebook Page or Twitter profile and taking your answers into consideration. Here’s the first question of our Nerd Debates: “What’s the best iPhone case out there and why?”

It was a surely heated debate, and there were some great comments. Though there isn’t a clear winner to our nerd debate, here are a couple of the stand-outs:

Nerd Debater Marissa something something Parish was the first to comment on our question and really set the tone for the rest of the conversation. Otter Box was a true fan favorite, and apparently we have a lot of Hummer owners as Facebook fans.

Peter Lane said, “Otter Box defender, my iphone hit the road at 35 mph when I left it on the roof of the car; works fine and not a scratch, even on the case.”

Peter Lane, I don’t believe you.

Facebook fan Justin Alicea wants to be like batman with the Speck Toughskin. There were a couple of other batman references in our debate, but none referred to a case so tough ast the one below. 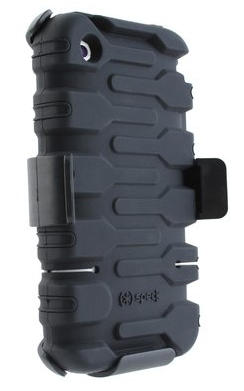 Yeah, Steve Jobs is an idiot. He should have had the iPhone designed  to look like this. Totally gave up market share to Speck.

Honorable mentions go out to Vaja Cases (you should visit the link just to look at the iPad Leather Agenda. It’s gorgeous.) and the Morphie Juice Pack.

Also a shout out to my boys going commando: Charles Moore and Matt Petruzzelli. Thanks for not putting your iPhone in a case.

Finally, I want to apologize to Mark Gladwell. I didn’t believe you when I read your comment. I seriously thought you were joking, but I was wrong.

I posted the picture for proof that this was an actual comment submitted to Nerd Debate. “Made from genuine decommissioned British fire-hose…parachute silk…reclaimed old tea sacks…” I think when I got to tea sacks I stopped believing that this was a serious post, but then I visited the link and was instantly transported to a land of the ingredients listed above.

And though the Elvis & Kresse iPhone case is more of a pouch and won’t protect your iPhone during use, I LOVE it. And 50% of profits go to charity, so I must buy one and do the world some good.

As we all know, Nerd Debates are never over, they’re just postponed until after I watch some BSG reruns. Please feel free to chime in on our conversation in the comments of this post or on our Facebook Page. You can also follow us on Twitter to be a part of Nerd Debate: Twitter Edition.