After making inquiries about getting his prototype design mass produced for more economical sale, Buckner has decided for now to let his one-of-a-kind item fetch what it will on eBay, with a starting bid just shy of $3K.

But making and selling pricey one-offs isn’t the talented designer’s idea of success. “I would love to design new products for companies,” he told us in an email exchange. “I love making prototypes for my ideas but with no way of easily mass producing them, I’ll never make it.”

So Bucker’s focused his attention on looking for work with manufacturers on product design, industrial design, furniture design….anything that would put his talents to more effective (and less risky) use. 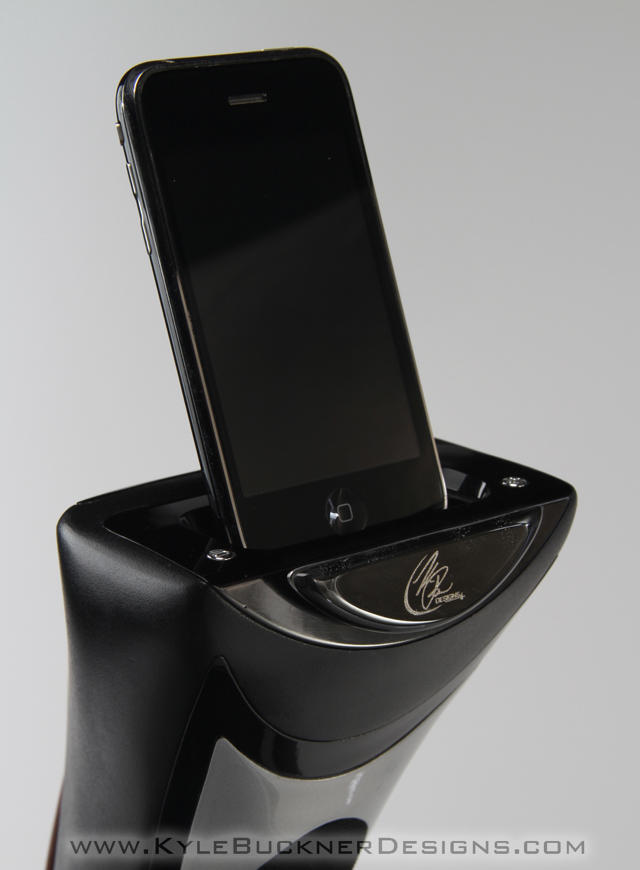 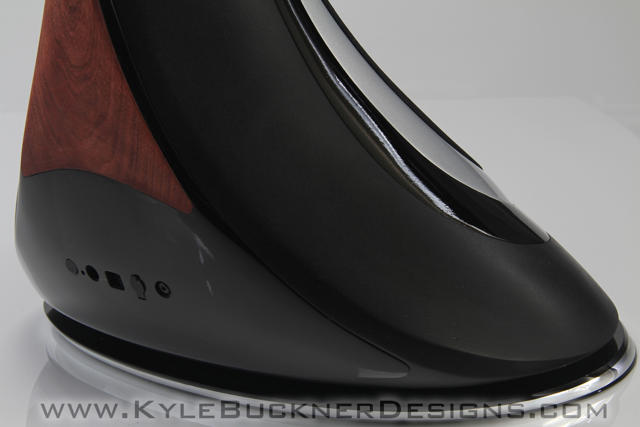 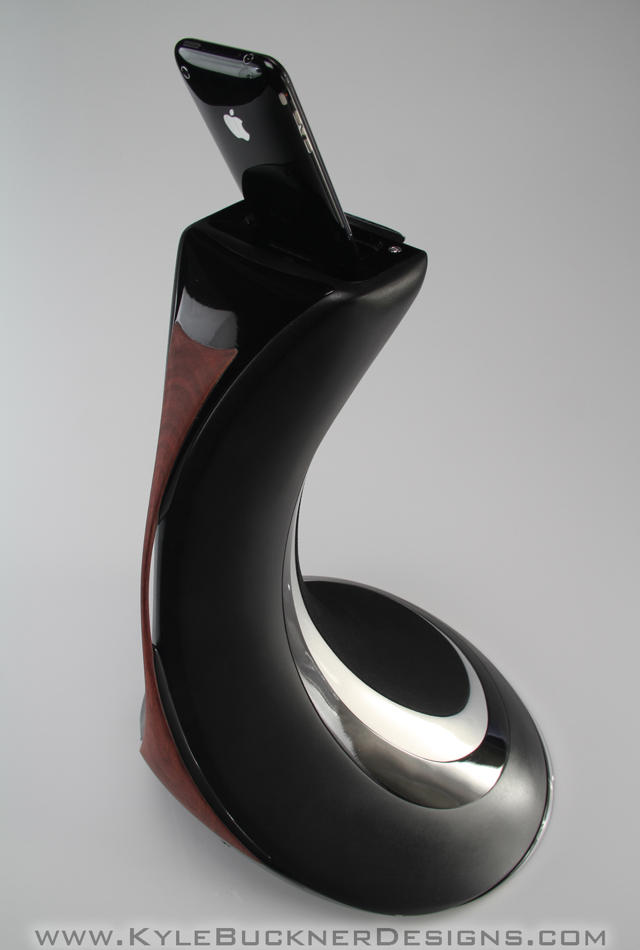 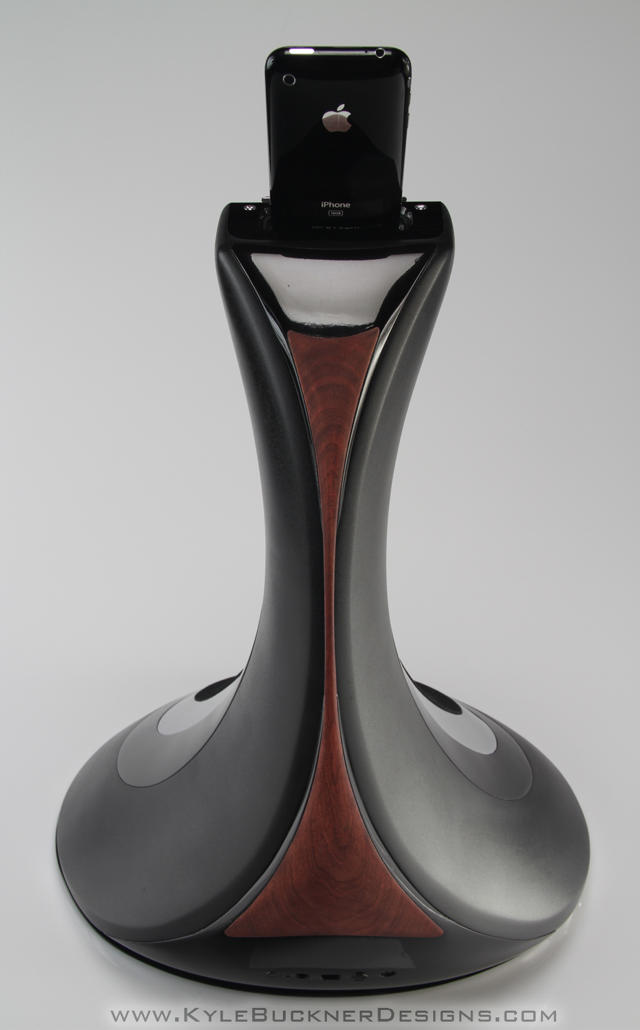 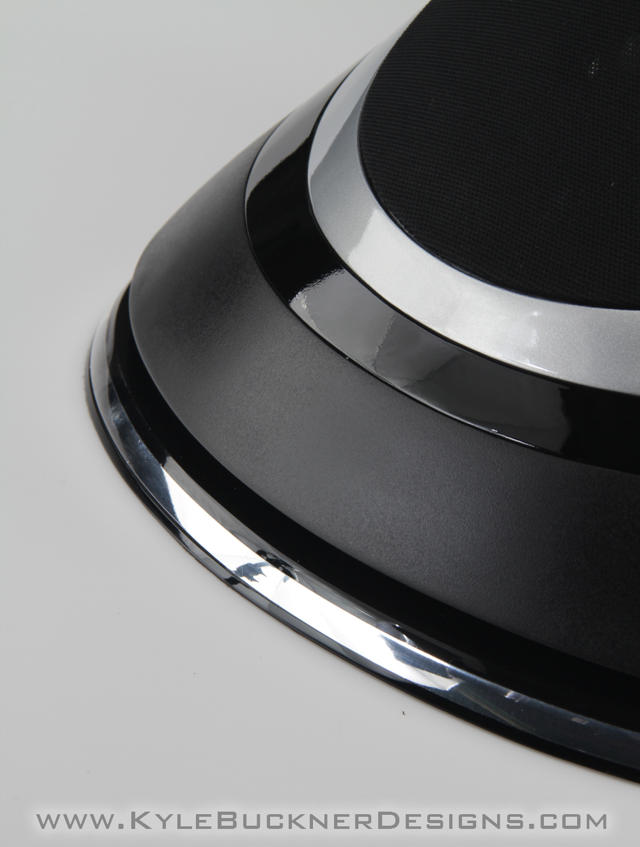 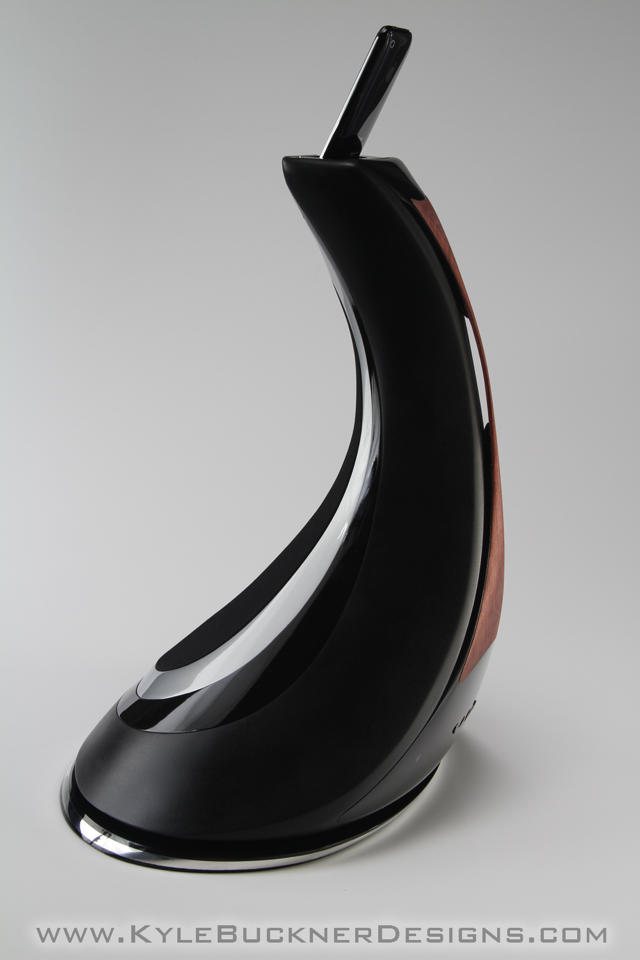 The dock is 20″ tall x 15″ wide x 14″ deep, completely handmade from fiberglass, aluminum, wood and plastics. Its two touch-button volume controls sit up top, beside the docked device, which can be any docking version of the iPhone or iPod, including iPod mini, iPod Photo, and Video iPod. A stereo mini jack connection allows you to connect MP3 and CD players, desktop computers, satellite radio and laptops. 4 Transducers are mounted behind the speaker grill in the front. Every color you see, is its own individual layer of fiberglass. Everything was hand made, all the fiberglass layers, etc. The grill is made of fiberglass with holes cut out for the transducers, then wrapped with a grill cloth.

The base is made out of 1/8″ black acrylic, and 1/4″ aluminum plate. These were all mounted together and cut and polished as one.

Red LED’s are also incorporated in the design. When users hit the power button located on the back, LED’s light up around the base and around the logo up top.

There is also a thin piece of cherry wood Buckner carved for the backbone. The dock was actually a wood “container” project for a woodworking class, so Buckner had to incorporate some wood somewhere and also had to convince the professor that the piece was actually a container. “The rest of the class just asked him to agree because they just wanted to see me make this idea I had,” Buckner told us.

Compatible with most docking versions of the iPhone, iPod, including iPod mini, iPod Photo, and Video iPod. A stereo mini jack connection allows you to connect MP3 and CD players, desktop computers, satellite radio and laptops.