The battle between the Dark Knight and the Man of Steel in Batman v Superman: Dawn of Justice has been billed as the greatest gladiator match of all time, but if you’re looking for a film with substance and cohesion, you should probably avoid the new movie like Clark Kent shuns kryptonite.

The sad truth of BvS is that it beats itself into a bloody pulp thanks to its brutish director, Zack Snyder, who can’t tell a compelling story to save his life — even when he’s got more than 70 years of comic book history to mold to his will.

In BvS, the message is as clear as the Bat-Signal: It’s time to pull Snyder away before he ruins more movies that could have been great.

The fact that the new Batman movie disguised as a Superman movie is superbad truly came as a shocker to me. Considering Snyder’s body of work, though, it shouldn’t have.

I fell in love with his style as screams of “This is Sparta!” shrieked through cineplexes when 300 came out. But looking back, the plot and the characters weren’t that great. And that problem has plagued the director in all his other films, including this one. Sucker Punch, that Owl movie and Man of Steel should have been clear signs that Snyder cannot be trust with revered characters like Batman and Superman.

That’s not to say BvS is an absolutely horrible movie. It’s very bad. However, mixed in with all the silly story lines and dark, brooding scowls are some bright rays of light that comic book nerds and casual fans will enjoy.

Ben Affleck is a great Batman and an even better Bruce Wayne. He’s a worthy successor to Christian Bale’s Batman and absolutely nails the role.

Affleck’s take on Bruce Wayne is different from Bale’s. He seems more confident and enjoys the vices a billionaire can indulge in, while Bale’s Bruce Wayne used them as a cover. Affleck also doesn’t do the deep, scruffy Batman voice all the time, which is a welcome change.

Both new versions of the batsuit look great. Bruce’s weapons and vehicles in the movie are all about brute strength and lack the subtly of design that would make Jony Ive proud (the Batplane especially looks weird), but they get the job done. I came away from BvS more excited about the possibility of a new solo Batman movie directed by Ben Affleck than anything else.

No one will top Michael Caine as Alfred, but Jeremy Irons works well as this character. His version of Alfred is younger and a bit more badass, and Irons and the Batfleck exhibit great chemistry.

I only had two small quibbles: 1) Nearly all his lines are spoken into a microphone. 2) The bond between Alfred and Bruce wasn’t really explored at all. We get shots of the past but no conversations about what’s happened that changed Bruce. There’s one line that vaguely mentions good guys that went bad, but no depth.

Gal Gadot is really underutilized, but when she finally comes on the screen as Wonder Woman it takes the film to an all-new level. She spends most of the movie making small appearances as Diana Prince, jetting around the world and living a lavish lifestyle. Once she enters the big battle to bust out a whooping with her lasso, shield and sword, you fall in love with her.

I didn’t expect Laurence Fishburne to be the brightest ray of light in this movie, but as Daily Planet editor Perry White, he gets to drop some of the best lines. The few scenes he is in add much-needed levity to a movie that’s got more dark stares than a runway fashion show. 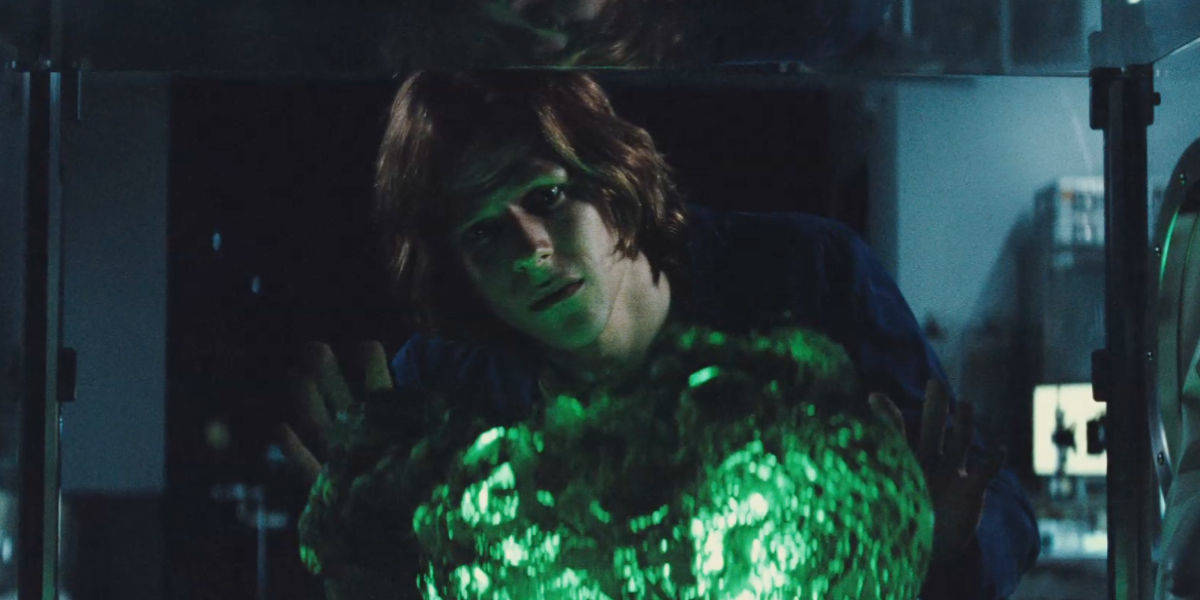 Jesse Eisenberg has a tendency to play slightly neurotic, schizo characters. In Batman v Superman, he takes it to an all-new level with his portrayal of Lex Luthor. Eisenberg tries so hard to come off as hyper-intelligent by adding tons of nuance to his facial expressions and body language.

Instead of seeming brilliant, he looks like a 5-year-old who just ate way too much candy. There’s no reasoning to why he wants to destroy the world,  so he comes off as crazy rich guy who somehow runs one of world’s largest companies. You could imagine the role going much better if Eisenberg added some Steve Jobs flair, but the performance ends up being entirely too contrived, like he went “full retard.”

What the hell is going on? I lost count of the number of times my buddy and I turned to each other completely baffled by what was happening onscreen. Much of the movie doesn’t make any sense at all: The film wanders almost aimlessly for two hours before finally coming up with a bad reason for Superman to beat up Batman.

The entire plot is a convoluted mosaic. Scenes of Bruce Wayne, Lex Luthor and Clark Kent play out with no particular order or structure. Each scene reeks of self-importance, yet fails to seamlessly fit with what comes next. Wonder Woman is around, too, but not doing anything significant. Most of the time, she and Lois Lane are just there because why not include them in as many scenes as possible even if it adds nothing?

Dream sequences in BvS impart no meaning or consequence to the overall story and serve only as an opportunity to show some crazy visual effects work or to bring Kevin Costner‘s Pa Kent back from the dead to talk about how one time he saved his family farm from a flood.

BvS boasts an absolutely stellar cast from top to bottom, yet it’s amazing how little the actors were given to work with in their roles. Henry Cavill gets one decent scene with his mom and one slightly not-cheesy scene with Lois Lane. The rest of the time he’s forced to brood, beat people up or stand tall and quiet.

Lois is just a prop throughout the movie. Affleck alone enjoys strong scenes that show his character struggling as a human, which makes Batman the only character you care about.

The movie’s Dawn of Justice subtitle might lead you to believe other superheroes will share some screen time with Batman and Superman, but that doesn’t happen. We see one short scene each of the Flash, Aquaman and Cyborg. The way they’re introduced is ridiculously lazy and boring.

Alert! Minor spoilers below:
Doomsday is a weird amalgamation of bad CGI that looks like a crossover between The Abomination in The Incredible Hulk and a troll straight out of Tolkien’s Middle-earth.

The ultimate showdown with Doomsday, which has been teased in BvS trailers, turns out to be a gigantic letdown. Batman, Superman and Wonder Woman finally join forces for a huge fight full of really loud noises and huge explosions, but the confrontation ends up being forgettable.

There’s a lot of booming and smashing. Nothing really cool happens. And then Doomsday is gone just as quick as he arrived. Just like the rest of the movie.