Steve Jobs is at it again — emailing Apple customers with answers to their questions.

This one was sent to CultofMac.com by reader Paul Greenberg, who asked Jobs about a missing MobileMe feature that’s been bugging him for three years: the inability to sync notes via MobileMe.

Jobs showed Notes syncing at Macworld 2007, when he introduced the iPhone. Notes can be synced between the iPhone and Mail app, but only via a hard-wire sync — not through MobileMe. (The feature is available in the beta 4 version of iPhone OS, which is slated for summer release for iPhone and September for iPad.)

It’s not just Greenberg who’s been eagerly awaiting the feature. There are reams of complaints on Get Satisfaction, MacRumors Forums and AppleInsider Forums.

Seizing the initiative, Greenberg emailed Jobs about it:

Why can’t I sync notes over MobileMe?

I have 2 iMacs, MacBook Pro, iPhone and now iPad but for some reason over the air syncing isn’t supported.

Will you be fixing this soon? I remember you mentioning 3 years ago ago at Macworld. I love what you’ve done to change the way I work but this is really bugging me! Sorry.

In typically terse fashion, Jobs replied that the feature will be added soon:

Fixed in next software update.

Sent from my iPhone 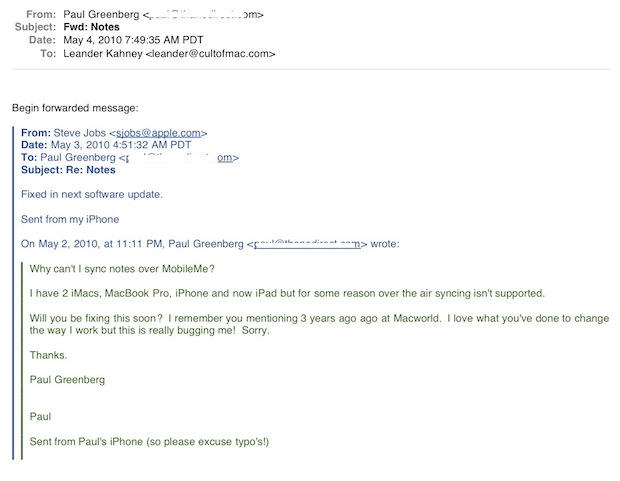