We still don’t have exact sales numbers on the Apple Watch, but something is clearly having a big impact on Fitbit, Apple’s biggest rival in the fitness wearables category.

Fitbit stock dropped 19 percent today after its forecasts missed estimates, and analysts downgraded the stock as a result. Fitbit shares have declined 44 percent this year so far. 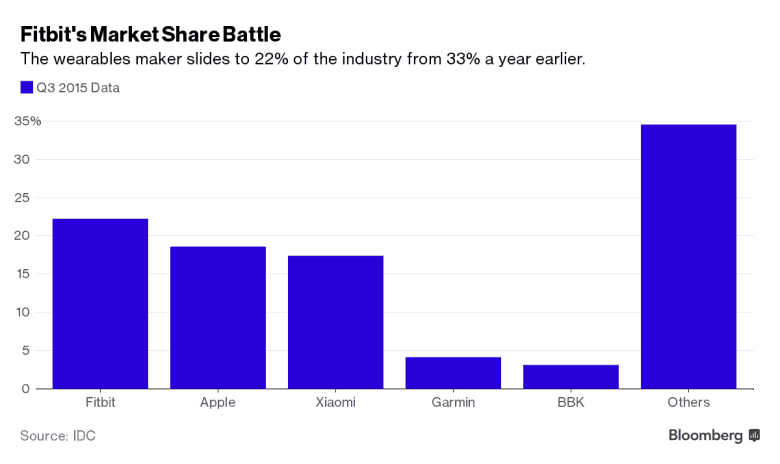 Fitbit currently remains the leading selling of wearable fitness trackers, although its market share is falling. In the last quarter of 2015, it declined to 22 percent of the market from 33 percent one year earlier, according to IDC figures.

“This has been a pretty competitive category for a while,” Fitbit’s CEO James Park said. “The story will play out, but in the short term we can’t control the share price.”

In the meantime, Fitbit keeps expanding its lineup — recently announcing new models Alta and Blaze — but it’s no surprise that it would run into problems as companies like Apple take aim at the market with their superior marketing firepower.

With that said, it could still turn out that fitness trackers are a completely separate market to smartwatches. “While we certainly do not want to discount smartwatches, Apple Watches in particular, consumers are telling us they find very different needs for those devices, and for now they find some smartwatches in the market very costly,” Betty Chen, an analyst at Mizuho Securities USA, told Bloomberg.

Then again, isn’t that what people said about PDAs and portable MP3 players before the smartphone took hold?