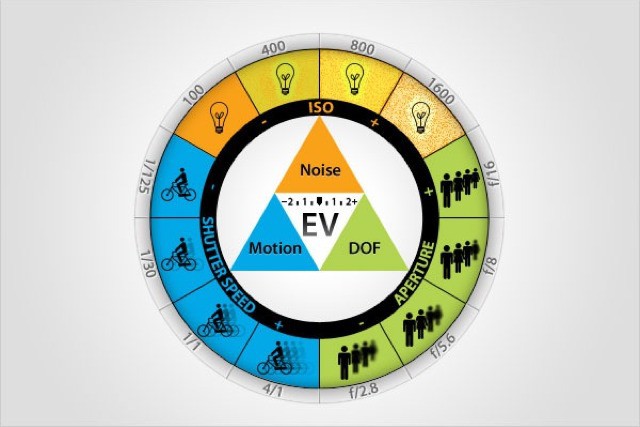 New Year’s Eve, the night when alcohol-fueled confusion reigns. But unlike this self-inflicted bamboozlement, which can only be cured with time and a hearty breakfast, the confusion you feel when you start thinking about camera exposure can be fixed right now, using this excellent resource from Exposure Guide.

The relationship between shutter speed, aperture and ISO can appear to be a swirling mathematical mystery, but it is in fact as straight-cut and scientific as light itself. In short, changing any one of them by a single step (called a “stop”) will half or double the amount of light that ends up in your photograph.

Thus, dialing up the shutter speed by one stop while simultaneously dialing down the aperture by a stop will let in the exact same amount of light.

However, those changes also affect the quality of that light. So you can keep the exposure the same, choosing to blur the image with a slow shutter speed, or blur the background with a wide-open aperture, or do both by cranking down the ISO.

And amazingly, the infographic above manages to squeeze all this info into a single image.

Now that many of us use our phones as our main cameras, and those same phonecams allow greater control over manual settings, this info can be used to take better pictures. And once you have wrapped you head around it, it will seem as natural as riding a bike.

So take a break from preparing those pre-mixed New Year mojitos and read up on this fascinating subject. Or just Instapaper it and read it tomorrow from under your cloud of hungover fug.