A Twitter user has shared surprising details of the first firmware update for Logitech’s Create iPad Pro keyboard, which he was prompted to install after grabbing the iOS 9.3 beta 2 seed.

The Logitech update appears to fix a nagging keyboard lag experienced by some users, but that’s not even the coolest part: It looks like the iOS beta pushed the firmware update to the Logitech Create through the iPad Pro’s Smart Connector.

German iPad Pro user Stefan Wolfrum says he installed the new iOS beta yesterday and was asked to allow the update of his keyboard’s firmware today.

“Apparently, iOS 9.3 beta 2 is able to update the firmware of a Smart Connector keyboard — and actually did this with the Logitech Create keyboard I’ve currently connected to my iPad Pro!” he wrote in a Logitech support forum thread devoted to the keyboard lag. “Now THAT’s something new!

Wolfrum documented the whole thing in a series of screenshots posted to Twitter.

As the screenshots show, iOS 9.3 beta 2 users whose accessories require firmware updates are prompted with a simple question: “Would you like to update ‘Smart Connector Accessory?'”

It’s a fairly safe assumption that this somewhat-awkward text will at some point be replaced with something more meaningful, like the name of the accessory being used rather than a generic placeholder — assuming this is indeed a new feature of the latest beta release.

Once users accept the new firmware, they are provided with updates as to how far along the flashing process the system is, with the whole thing completing before control of the device is handed back over. To that point, devices running accessory firmware updates are unavailable for use until completion. (Thankfully, Wolfrum says this instance didn’t take too long.) 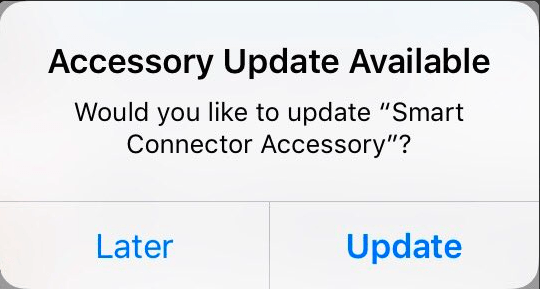 This is the first time we have heard of iOS 9 updating an accessory’s firmware, and it’s certainly the first to use Apple’s new Smart Connector, which adorns the iPad Pro. We haven’t heard of any updates being pushed out to users who are not running one of Apple’s iOS 9.3 betas, so it looks like this is another new feature we can look forward to.

Expect to see more use made of that connector in due course, especially if it trickles down to the iPad Air and iPad mini models.

If you’re interested in the Logitech Create keyboard, you might want to check out our review of the iPad Pro accessory. (Spoiler alert: You’re going to want one.)