A dating app has what sounds like a noble and magnanimous purpose, but some members of the LGBTQ community aren’t seeing it that way.

Hanky is for gay men who want to avoid “creeps, time­wasters, and fake profiles.” And to that end, it’s really tough to get in. You either need an invite code or three recommendations from existing members. You also have to validate your phone number or sign up with your Facebook account to make sure you’re real.

But all of those membership hoops are causing a fuss.

A write-up earlier this month on NewNowNext, LGBTQ-centric network Logo’s cultural blog, describes Hanky as “The Mean Girls of gay hook-up apps and says it’s for “fans of internalized homophobia and prejudice.”

It’s not having much better luck on social media, as prominent figures with thousands of followers have taken to their platforms to condemn the app.

BECAUSE WE ALREADY DONT ALIENATE OURSELVES ENOUGH @Hanky AKA THE MEANGIRLS APP @NewNowNext @WorldOfWonder https://t.co/ZB4F5ORAmw 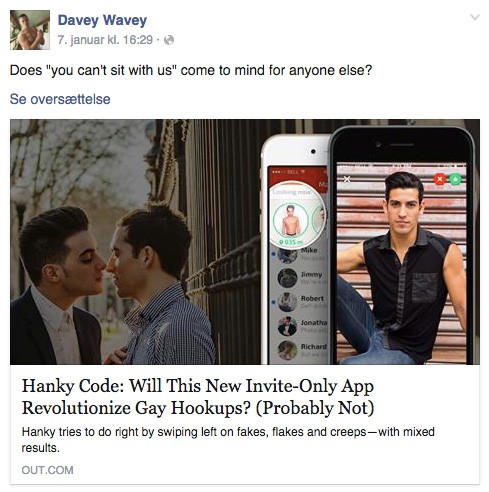 Not that this outrage comes completely out of nowhere; Hanky‘s membership process is, by design, meant to keep most people out. It “already receives thousands of applications every day from around the world,” the company says in a press release. “But 8 out of 10 guys do not get in.”

Hanky‘s super-low rate of acceptance is likely a combination of weeding out “undesirables” and the standard-issue spam accounts that come with everything you’ve ever been able to sign up for on the Internet, but the community is more concerned about that first part, claiming that this kind of blatant exclusion among an already marginalized group isn’t doing anyone any favors.

This isn’t the only dating app engaged in this sort of behavior, but it is certainly the one that’s the most upfront about it. GROWLr is specifically for “bears,” a subset of the male gay community that emphasizes masculinity and/or excessive body hair. Christian Mingle, in both its web and app forms, is for “people of [specifically the Christian] faith to meet, date and relate.” And let’s face it: You’ll likely have a better experience on Tinder if you’re good-looking, since the entire app is about making snap, up-or-down judgments based almost entirely on pictures.

And the controversy surrounding Hanky doesn’t seem to be bothering its company much.

“Funny thing is that all those daily rants give us a huge load of hot guys trying to get in,” Hanky co-founder Jonas Cronfeld told Cult of Mac in an e-mail. Whether or not he intended that pun is unconfirmed as of this writing.

Hanky is currently available for free in the iOS App Store. An Android version is due out soon.