In part 12 of Macworld founder David Bunnell’s story of the early Mac, Bill Gates is the only developer to actually deliver on his promises of software for the Mac. Microsoft’s Excel literally saves the Mac just when sales drop to nil, but at the same time Gates’ engineers are reverse engineering the GUI for the first version of Windows.


Once the hoopla of the Macintosh introduction receded, first the computer press and then the business press began to zero in on the Mac’s shortcomings. Under-powered and inflexible, but really cute, they began to refer to it as a “yuppie computer.”

Users complained about the repeated crashes caused by overheating, but most of all, they bemoaned the lack of software. Three CEO’s from the then leading software companies, Mitch Kapor from Lotus, Fred Gibbons from Software Publishing and Bill Gates from Microsoft (pictured below) had appeared on the stage with Steve Jobs and proclaimed they would support the Mac with application software. The Mac is great, they each seemed to say, and we are with you 100%. 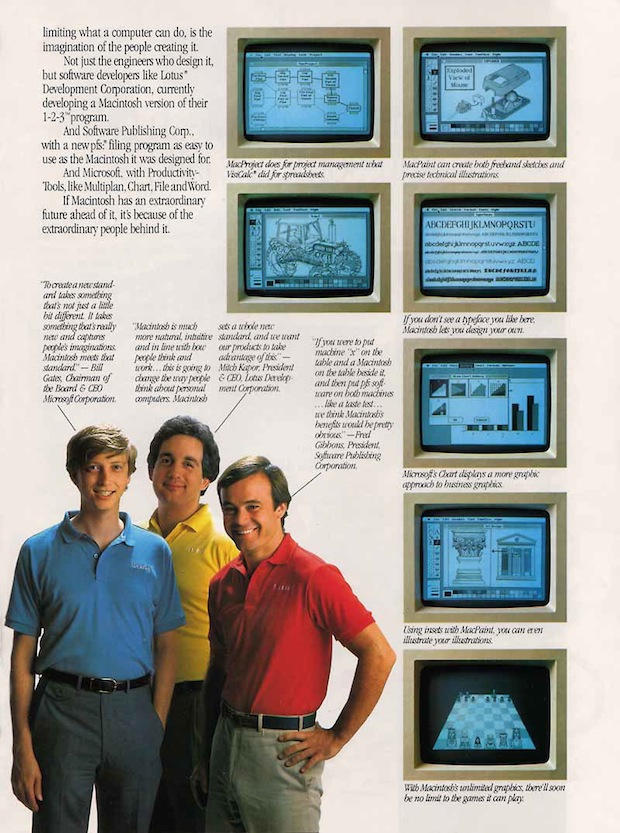 But only Gates came through and that was initially with a clunky spreadsheet program, MultiPlan, that wasn’t nearly as good as the ones on the IBM PC. Many PC users, in fact, made fun of Mac users–sure you could change the type fonts on a Mac and draw nice black and white pictures with MacPaint, but then you had to use MacWrite. Compared to Microsoft Word or Word Perfect, MacWrite truly sucked.

I had many dealings with Apple following the launch, mostly with Mike Murray and John Sculley. I didn’t hear much from Steve until April, when Apple finally came out with the “Enhanced” Macintosh that had 512K of memory.

The 512K Mac was very significant because it made it easier to develop applications, which included Microsoft’s Mac version of a much better spreadsheet program called Excel. Oddly enough, Excel helped boost Mac sales just when they were dwindling to zero. Thus, on one hand Microsoft was saving the day while on the other hand they were secretly reverse engineering the Macintosh Operating System.

We were relieved and also excited by the potential of a small piece of embedded software called the “Switcher” would allowed the Mac to keep two or more applications open at the same time.

Somehow Steve had heard we were going to call this new Macintosh the “Fat Mac” because, well, it had four times as much memory and this is what many of the developers were calling it. Steve objected to the word, “fat.” He called me to express his concerns.

“Fat is ugly,” Steve said, “and the Mac is beautiful, the enhanced Mac isn’t fat, it looks exactly like the 128K Mac.” He had a point, I guess, but after telling him I needed to think it over, I left it alone.

What we called the new Mac wasn’t really all that important, I suppose, but we planned to use “Fat Mac” on our cover. Changing it would have been a case of Steve meddling with our editorial. I simply didn’t want to bring this up with our editor, Andrew Fluegelman.

The business side of Macworld was going extremely well. Subscriptions were pouring in as 80% of the early Mac buyers sent in their warranty cards. We were also getting additional subscriptions from newsstand sales. Third party hardware and software developers, as well as book publishers, looked at us as the only viable way to reach the market. Even while there still wasn’t enough software, our advertising sales were picking up.

At this point, Macworld was profitable. The Macintosh was not.

Even after the Fat Mac came out, the critics persisted and the IBM PC continued to rule. It only lacked a mouse and a graphical users interface (GUI). Microsoft was frantically developing a new PC operating system that would correct this situation.

Introduced in August, 1985, “Windows” turned the PC screen into a bit-mapped screen that looked remarkably like the Macintosh. Suddenly, the PC had a mouse and you could change the fonts, and it even had a cute trashcan icon, just like the Mac!

John Scully told me Steve had worked his development team so hard for so long that as soon as the introduction was over they became totally lethargic. “A whole year was wasted,” Sculley said.

The necessary improvements required to make the Macintosh all it should be were agonizingly slow to appear. Steve Jobs, it seems, was asleep at the wheel.