The Spider-Man drawing above was created entirely on the iPad Pro using Procreate and the Apple Pencil. After many years, my love of drawing has been reignited and transported to the digital age.

Friends of mine from childhood, high school and college remember me as someone who loved to draw. Armed with reams of continuous pin fed dot matrix computer paper from my father’s workplace, my elementary school friends and I would draw battleships and castles. Our fortresses featured various dungeons, moats and parapets to defend the inhabitants from the invading hordes. Our vessels would have multiple 16-inch cannons, missile launchers, and enough anti-aircraft, anti-missile, and anti-submarine weaponry to repel any assault on our naval fleet. As I entered middle and high school, I began reading comic books and drawing Spider-Man, Iron Man, and Batman in my sketchbooks.

Yet, as much as I loved computers, I never took a liking to drawing digitally. Tools like Illustrator still confound me to this day for anything but the most simplistic projects. I remember buying one of the first Wacon Intuos tablets, but I could never get used to the experience of looking at the screen while drawing on the tablet. It felt unnatural and I yearned for that 1:1 experience. I realize that many people have no problem with this approach, but it just wasn’t for me. I’ve tried numerous styluses, both dumb ones and those with Bluetooth for my iPhone and iPad, but none could replicate the feeling of drawing on paper.

Today, Wacom has its Cintiq line, Samsung has the Galaxy Note 5 which features a halfway decent stylus in the S-Pen (though the screen is too small for the type of drawing I would like to do) and Microsoft has Surface tablets which come with high-precision styluses. As a longtime Apple user, however, I could not bear myself to switch platforms.

With all that said, one can imagine my excitement with the announcement of the iPad Pro and the Apple Pencil. The videos depicting the Pencil in action were impressive, and I waited with great anticipation at midnight of launch day to order the Pro and Pencil. While I was able to pick up my iPad Pro on day one, my Pencil was backordered for three to four additional weeks. In some ways, this was good, because it gave me the chance to become more familiar with the differences in the iPad Pro compared with my other iPads. It features the best software keyboard that I have used to date, one that I can conceivably use for typing long form text and editing HTML documents.

I didn’t buy the iPad Pro for typing; I bought it to draw! So last week, I began calling Apple Retail stores around the peninsula, asking if they had any Pencils in stock. I was initially told that all Pencils were backordered, and that they wouldn’t be arriving for weeks. Then, I read reports that small batches were indeed arriving at retail stores, including the one nearest to my house. I went to that store on the morning of the 19th. The specialist informed me that while none were in stock at the moment, more were coming later in the day. So, back home I went and waited until after lunch. As I entered the Apple Store, my eyes went directly to the shelf  where the Pencils should have been. My heart sank when I saw an empty shelf. Fortunately, my prayers were answered; they had 10 more in the back! 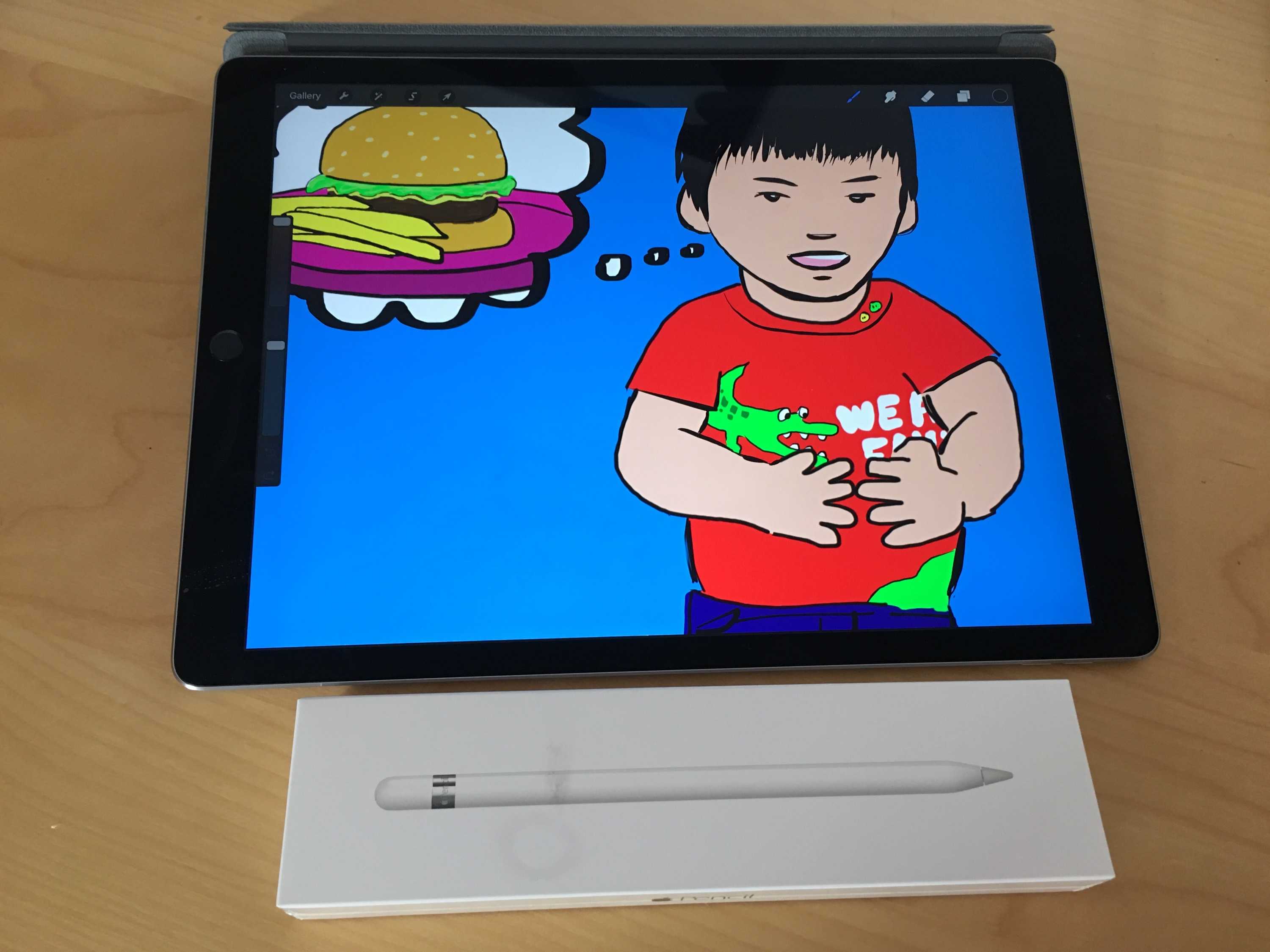 Up until now, I have been using an Adonit Jot Pro Bluetooth Stylus and Procreate on an original iPad mini for my digital illustrations. Shown above is a page from a children’s book that I am making for my son. While the Jot Pro was certainly better than using my fingers, I have not been entirely satisfied with it. The lag, the weird plastic disc at the tip, and the buttons that I kept pressing by accident were annoying. The lack of good palm rejection in all of the iOS apps I’ve tried to date made drawing an awkward experience.

The Apple Pencil resolves all of these problems to my satisfaction. It has the least lag or latency of any stylus I’ve ever used due to the high sampling rate between the Pencil’s movements on the iPad Pro’s display. The tip of the Pencil is small and precise; where I place it is where the digital ink appears. I know Wacon tablet users love their buttons, but I like the fact that there are no buttons on the Apple Pencil; there’s nothing to accidentally press. Finally, palm rejection is extremely good across several applications like Paper, Procreate, and Notes. I am so glad to be able to place the side of my hand right on the screen without worrying that a big splotch would appear! And while there remain times when I see a stray ink mark, it happens so infrequently that it’s not a problem for me.

Procreate from Savage Interactive is an excellent painting application that offers multiple layer support, perspective tools, dozens of pre-set brushes, and an easy-to-use interface. It also records everything you do in the app, making it easy to see how I went from a blank canvas to the finished Spider-Man drawing.

It’s only been a few days, but to say that I am satisfied with the Apple Pencil is an understatement. For artists like me who never got accustomed to drawing on graphics tablets like the Wacom Intuos, didn’t want to plunk down the cash for a Cintiq, nor felt the need to switch platforms, the Apple Pencil and the iPad Pro is a game changer. And the great thing is that this technology is only going to get better. I’d welcome using the Apple Pencil on a smaller iPad for those times when I want a more portable drawing system. I’d also like to see better iCloud support in Procreate so that I can easily switch between art projects on all of my devices. I fully expect to do much more drawing in the future, now that the technology has matched my expectations.

This is a guest by Adam Tow, a Bay Area technologist, photographer, and Newton fan. Tow is a senior producer at Re/code. This post first appeared on his personal blog.