Heading to social media to vent about Chipgate, some iPhone 6s owners are upset to discover that not all A9 chips are created equal.

Worse, some feel duped by Apple, which used two vendors to supply different versions of the chips in “identical” phones. Others worry about reports of inferior battery life — and some are thinking seriously about returning their new iPhones. Still others are playing the latest Apple controversy for laughs.

The controversy and concern revolves around videos that allegedly show that iPhones packing an A9 chip made by Taiwan Semiconductor Manufacturing Company enjoy better battery life and run cooler than phones containing a Samsung A9 chip.

“Lies!!” wrote superbly sarcastic reddit user ShatteringFast. “This test shows we must burn Apple to the ground for daring to source different parts!”

Chipgate is the latest “-gate” to dog Apple — an annual ritual of snarkiness and hand-wringing that follows the release of every new product out of Cupertino. From Antennagate to Bendgate, Apple’s product foibles — whether legitimate or totally overblown — are virtually guaranteed to generate heat online.

When it comes to Chipgate, some wrote with a more measured tone rather than going over the top with anger or going for a punchline at Cupertino’s expense.

“So #chipgate is becoming big,” wrote Mike Cronin on Twitter. “It’s too bad because Apple is known for consistency, which isn’t happening with 2 different chips.”

Some question whether the results of the GeekBench scores used in the videos are reliable for average users. Apple says the tests showing inferior performance are “manufactured,” and that Cupertino’s own tests show only a 2 percent to 3 percent difference in battery life between the two chips.

The videos that started the Chipgate controversy show a series of tests that gauge and compare performances on devices. Some say the test do not match “real-world use.” A post on a blog called Mostly-Tech from a year ago headlined “The Dirty Little Secret About Mobile Benchmarks,” says the scores are not reliable and easily gamed to make one device look better than another.

In the case of the two A9 chips that come in iPhone 6s units, the ones with TSMC processor seem to get anywhere from 5 percent to 20 percent more battery life, depending on who did the testing.

“I’m a victim of #chipgate lol,” wrote Ryan O’Neill on Twitter. “Luckily my plus lasts all day anyway.”

Whether you want a good laugh or need to feel like you are not alone with your Samsung chip, the social media messages below will not disappoint. 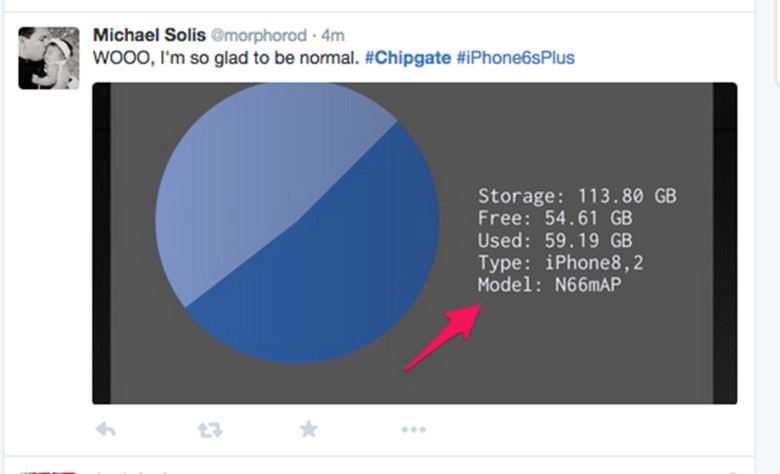 “Should I ask for a different color and roll the dice? asked Harjotonater.

“For most people, including myself, Friday will be the last day to return the phones,” wrote Nostalgia818. “I’m going to go in tomorrow to see if I can get an exchange.”

“Benchmarks are controlled,” wrote Harioo. “If a Samsung running a benchmark with a workload can only last 6 hours while TSMC lasts 8, that won’t necessarily translate to 2 hours real-world extra battery life, but it sure as s–t doesn’t mean Samsung is going to catch up to TSMC either.”