Not content with selling a whopping 13 million iPhone 6s handsets in their first weekend on sale, Apple is also smashing records with iOS 9 adoption.

According to Apple’s latest developer figures, just three weeks after its public debut, 57 percent of users with compatible mobile devices are already running iOS 9. Meanwhile, 33 percent are still using the last-generation iOS 8, while just 1 in 10 users is stuck on an earlier version. 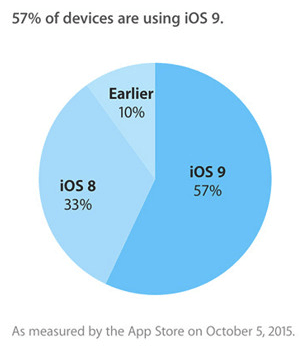 Apple measured its stats through visits to the App Store on October 5.

As a comparison, last year it took iOS 8 almost double the time — close to six weeks — to get past the 50 percent adoption mark.

Mobile app intelligence platform Crittercism predicted that iOS 9 would only hit 50 percent usage by day 25 — which puts Apple ahead the curve, provided that there way of measuring upgraders can be counted on, that is. Some app intelligence companies have suggested to me that this may not be the most accurate way of measuring adoption rate since it extrapolates from the more engaged users who are making regular visits to the App Store.

Either way, it smashes the kind of “records” Android is managing. The widest Android adoption by far is 38.9 percent for KitKat, which has been available since September 2013: the same time that iOS 7 brought Apple’s massive mobile OS redesign.

If you look at just the latest version of Android — Lollipop 5.1 — that number plummets to 7.9 percent.

Keep up the good work, Apple!