According to analysis from research firm IHS Technology, the iPhone 6s Plus costs Apple an estimated $236 to make — but nets the company an impressive $749 when it goes on sale.

That’s $513 markup per handset, if you’re keeping track at home.

It’s worth noting that IHS’s figures don’t take into account other Apple expenses, including shipping, warehousing, R&D and marketing. Apple has certainly ramped-up its spend in several of these areas over recent years, but it’s still an impressive indication of the kind of margins Cupertino enjoys.

As a comparison, rival company LG makes just 1.2 cents in profit for each smartphone it sells.

Check out the estimated breakdown of costs below: 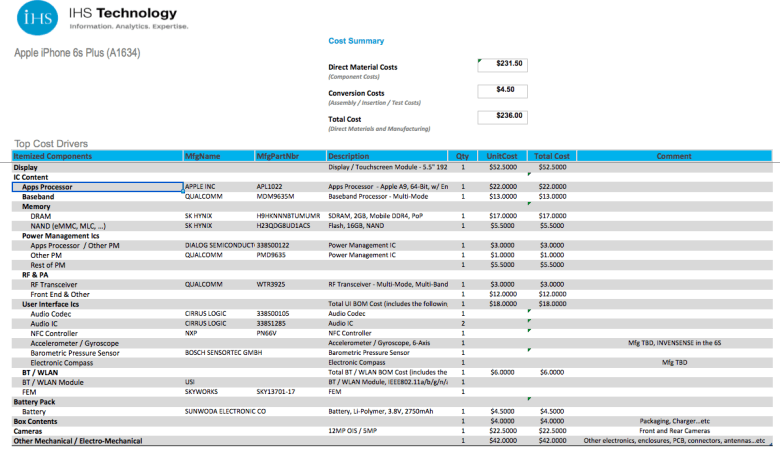 Perhaps the most intriguing figures are the fact that flash memory is very cheap — at just 35 cents per gigabyte. That means that, despite charging $100 more for a 64GB iPhone than a 16GB one, Apple spends just $17 extra in component costs.

The new A9 processor meanwhile costs around $22, while the advanced 3D Touch display sets Apple back approximately $52.50 — which is made $10 more expensive than it would otherwise be due to the addition of a third layer to each screen to read the changes in pressure.

Number of comments on this postLeave a comment
Posted in: News Tagged: IHS Technology, iPhone 6s Plus, profit margins