We’re less than a week away from Apple’s refreshed Apple TV service being announced, and a new report published by Adobe Digital Index is sure to bring a smile to faces in Cupertino.

That’s because an analysis of 1.49 billion TV Everywhere streams — referring to the paid streaming of shows through tablets, smartphones, computers and set-top boxes — suggests a whopping 61.9 percent is done via an Apple device. 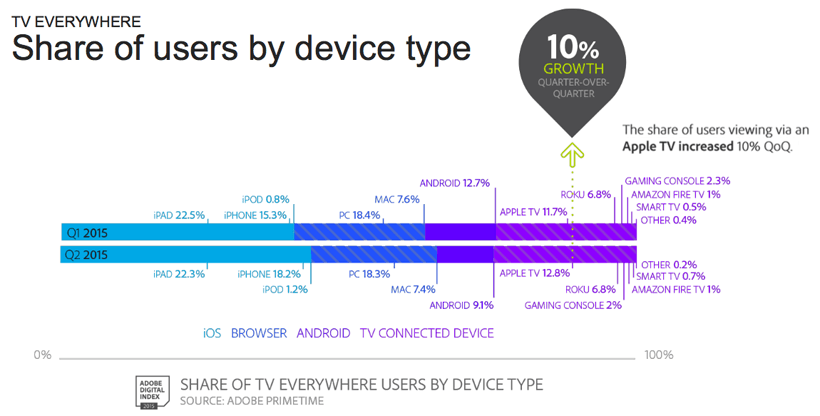 Apple’s refreshed Apple TV is expected to be unveiled at Apple’s iPhone 6s and iPad event on September 9.

Among other improvements, we’re expected to see a Siri-controlled universal search functionality that will let users pull results from various streaming video services by way of a single query, revolutionary motion-sensitive controller and a dual-core A8 processor, dedicated Apple TV App Store designed to turn the Apple TV into your home automation hub, and an Apple-branded streaming TV service.

With rumors of Netflix-style original content in the works, too, what’s the betting that Adobe’s TV Everywhere report this time next year will be even more lopsided in Apple’s favor?

“TV Everywhere is a juggernaut,” Adobe’s Tamara Gaffney says. “It’s coming whether the market is ready or not.” Good thing Apple’s more than ready to take advantage then.