New graphic novel Steve Jobs: Insanely Great recounts the late Apple leader’s life through 225 pages of gorgeously geeky illustrations, taking readers through his work at Apple, Pixar and NeXT as well as his time away from business.

“After two and a half years of research, writing and drawing, six bottles of India ink, twenty-four black Prismacolor pencils, a few madcap car trips to Silicon Valley, a teetering 5-foot-tall stack of reference materials, endless edits and reams of paper, it’s OUT!” Hartland notes on her website.

There’s even a Steve Jobs opera in the works (though it won’t get staged till 2017).

Given Jobs’ enduring popularity, it’s no surprise that this isn’t the first comic book to deal with his life. We’ve previously had efforts like this trippy take on Woz and Jobs’ friendship from their days at Atari, as well as a frankly bizarre Japanese effort in which Jobs has the sweeping hair and razor-sharp cheekbones of a Final Fantasy character. 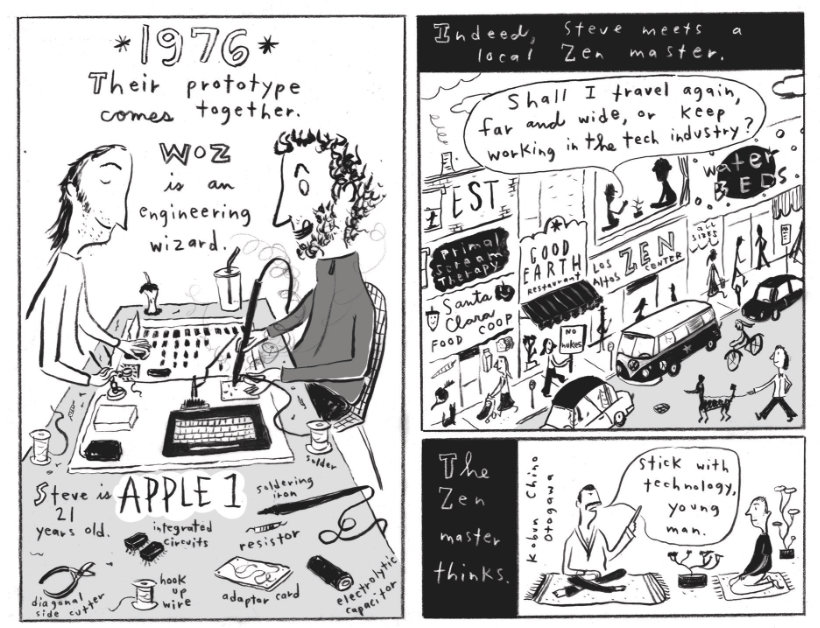 That being said, I love Hartland’s illustrations. They exhibit a pleasing simplicity that should make them appeal to anyone with a love of Apple-style minimalism.

Hartland also wrote several other books, including Night Shift, which is presumably about an all-nighter at Samsung HQ as they scramble to come up with their new “original” products following an Apple keynote. (It’s not really.)

If you’re not tapped out when it comes to your tolerance for the Steve Jobs story, pick up a copy of Steve Jobs: Insanely Great in your choice of formats today.