The tablet market continues to plummet worldwide, but Apple’s still leading the pack, thanks to the iPad.

According to new figures released by the International Data Corporation (IDC) Worldwide Quarterly Tablet Tracker, tablet shipments fell 7 percent year-over-year in the second quarter of 2015 to a total of 44.7 million units.

Of these, Apple shipped 10.9 million iPads to represent 24.5 percent of the tablet market — or 1 in every 4 tablets sold. Samsung followed with 7.6 million tablets shipped, representing 17 percent of all tablets, while Leonovo, Huawei and LG Electronics rounded out the top five sellers.

While Apple continued to lead, however, it is certainly not the dominant force that it once was, with the iPad suffering a year-over-year decrease of 17.9 percent negative growth. Ouch! 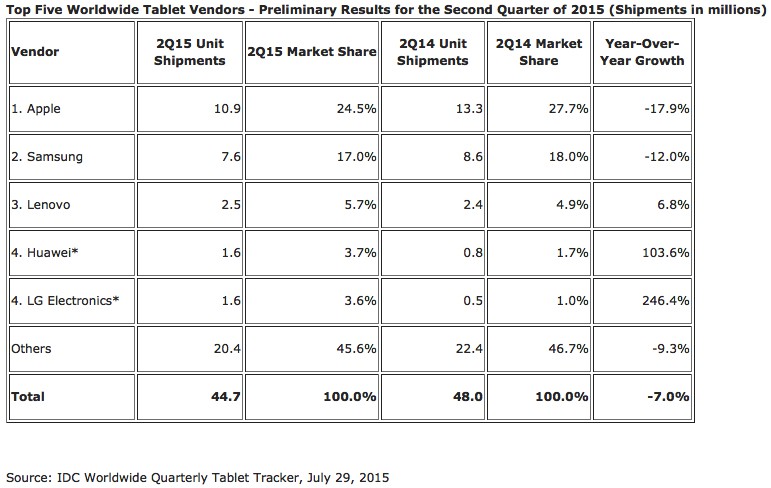 Tim Cook addressed this during Apple’s recent quarterly earnings call, in which he noted that he is still “bullish” about the iPad’s prospects. It would seem the folks at IDC agree, too, since when it comes to their remedy for falling tablet sales, they point to Apple to lead the way.

“Longer life cycles, increased competition from other categories such as larger smartphones, combined with the fact that end users can install the latest operating systems on their older tablets has stifled the initial enthusiasm for these devices in the consumer market,” said Jitesh Ubrani, IDC’s senior research analyst for tablets. “But with newer form factors like 2-in-1s, and added productivity-enabling features like those highlighted in iOS 9, vendors should be able to bring new vitality to a market that has lost its momentum.”

Given that Cupertino is rumored to be releasing three new iPad models this year — including the long-awaited iPad Pro — 2015 could wind up being the year when Apple finally turns its tablet business around. We hope.

Number of comments on this postLeave a comment
Posted in: News Tagged: IDC, iPad