For years I’ve been shuttling movies and TV shows between Macs at home and work using a portable hard drive.

But now that same drive is hooked to the internet thanks to the Pogoplug, a nifty $129 device that turns any USB hard drive into your own little cloud server accessible over the Internet.

Sitting on a bookshelf at work, the Pogoplug serves up all my files over the Net, even to my iPhone. It’s also going be a great complement to the iPad (arriving Saturday), storing all my media and streaming music and movies over the net without eating up the iPad’s limited memory. 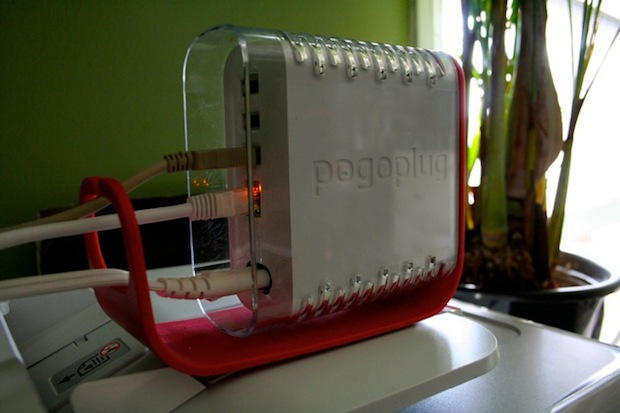 The Pogoplug also serves files to friends, family and coworkers. It’s the easiest shared drive I’ve ever set up and has been 100% reliable. It has also benefitted from several feature updates recently thanks to an enthusiastic developer community.

Best yet, after buying the hardware, the service is free, unlike other network storage services that charge annual fees.

Made by San Francisco-based Cloud Engines, the Pogoplug is basically a headless computer in a small plastic box about the size of a takeout box. This is version two of the hardware, and it’s a big aesthetic step up from mark I, which looked like an ugly AC adapter (we still gave it an enthusiastic review).

The Pogoplug has a gigabit Ethernet jack for connecting to your router, and four USB plugs — one on front, three at back — for hooking up any USB drive, even thumb drives. (You could also plug USB hubs into all four slots and really load up on the drives).

After a five-minute setup, the Pogoplug lets you access files on the drives from any computer, anywhere.

Files are accessible through any browser via my.pogoplug.com. Use Pogoplug’s free software (Mac and PC), and the drives show up in the Finder just like local drives. Files can be dragged and dropped — both on and off the remote drive. It couldn’t be easier, and in months of using the system, I’ve never had a problem accessing it, whether I’m at home, the office, or miles away across the country.

You can share a lot more files for a lot less money than an annual subscription to services like MobileMe or Dropbox.

Stream Movies to the iPhone

There’s also a free Pogoplug app for the iPhone/iPt (and Android and Blackberry), that organizes your files by type: Movies, Music and Photos. The app shows thumbnails or clips of each. It also allows access to files you are sharing with others, and files shared with you from friend’s Pogoplugs.

Watching a movie on the iPhone has been mostly painless. Streaming across AT&T’s 3G network, it’s been pretty reliable, stuttering a few times, but generally acceptable. The only catch is that movies have to be transcoded before you can watch them. The Pogoplug does this automatically if you set it up in Preferences. Transcoding is painfully slow, but it chugs away in the background, making it mostly a nonissue.

It’s dead easy to share files with others –a Sharing button sends links to friends via email, Twitter, Facebook or MySpace. The recipient clicks the link and the folder you’re sharing shows up like a local drive.

Sharing goes both ways. An Upload button in the browser interface lets friends share files with you by uploading them to the Pogoplug.

A big potential advantage is the enthusiastic developer community. For example, the community developed streaming media to XBox and Playstation 3 consoles, which was folded into a recent firmware update. The update also added Active Copy, a remote backup feature that synchronizes a folder on one Pogoplug to another Pogoplug offsite. You could, for example, set up one Pogoplug at home and another at the office, and have them backup each other’s backups.

The Pogoplug is by far the easiest network drive I’ve used. One minor annoyance is the inability to see how big the attached drives are nor how much hard drive space is free. (It’s buried on a Settings page). But so far it’s been the easiest way to make files accessible from anywhere on any device. It’s going to be a great complement to the iPad, making storage a nonissue. Two double thumbs up.

Number of comments on this postLeave a comment
Posted in: Reviews, Top stories Tagged: hardware, iPhone