Could the iPad become another gaming platform for Apple, like the iPod touch or iPhone? While much attention has been focused on getting books onto the new tablet device, new research indicates games comprise almost half of the iPad applications tested so far.

Games accounted for 44 percent of early applications tested on the iPad, followed by entertainment, according to analytics firm Flurry. Only 3 percent of those initial apps are books, the company announced Monday. The iPad is set to begin shipping April 3. 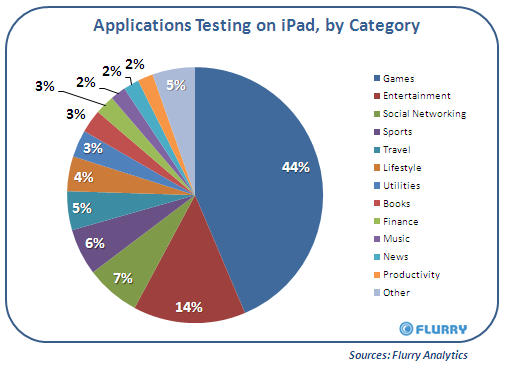 The iPad apps likely were used by Apple for testing purposes, according to Peter Farago, Flurry’s vice president for marketing. Earlier this month, the company announced a 185 percent jump in iPhone OS apps developed since the iPad was unveiled January 27. Developer interest in the iPad nearly tripled leading up to the iPad’s unveiling, with 600 apps developed in December 2009 versus 1,600 in January 2010, according to the company.

Almost since the day Apple CEO Steve Jobs publicly introduced the iPad, the focus has been on how the Cupertino, Calif. company would change the e-book and e-reader landscape. Macmillan and other book publishers quickly sided with Apple’s plans to increase the price of e-books while at the same time threatening Amazon’s 90 percent hold on the market. Earlier this week, reports filtered out that Apple might scale back plans to include magazines and newspapers after-minute negotiations with publishers apparently hit a snag.