We’re seeing a lot of reports across the Internet of Apple Watch owners getting some irritation from their wearables. We have a few likely culprits for these blights, including friction with the band; contact dermatitis from dirt, water, or soap getting stuck underneath; or allergic reactions to adhesives or nickel used in the smartwatch’s production.

Whatever the cause, however, the fact remains that wearable rashes are very real and not limited to Apple’s new smartwatch. Here are some of the most interesting (meaning disturbing and gross) pictures we’ve been able to turn up from the Internet.

You can barely notice it. Really.

@fitbit I thought u solved d rash problem, r u still using sub-standard mtrl 4 ur devices? what do u want me 2 do nw? pic.twitter.com/UWTwsMrn9Y

At least it didn’t mess up your tattoo, I guess.

And he’s still wearing his Apple Watch. What a trooper.

Got a rash from my apple watch band. pic.twitter.com/HdIRjJ8X7n

Fitbit Charge HR rash. Never had an issue with my old Flex. Guess this is going in a drawer. Apple Watch time? pic.twitter.com/FFh17iyrUu

My watch is giving me a rash, I guess I need to buy a new watch. Oh look the Apple watch is available for preorder. pic.twitter.com/I8nVnOE13P 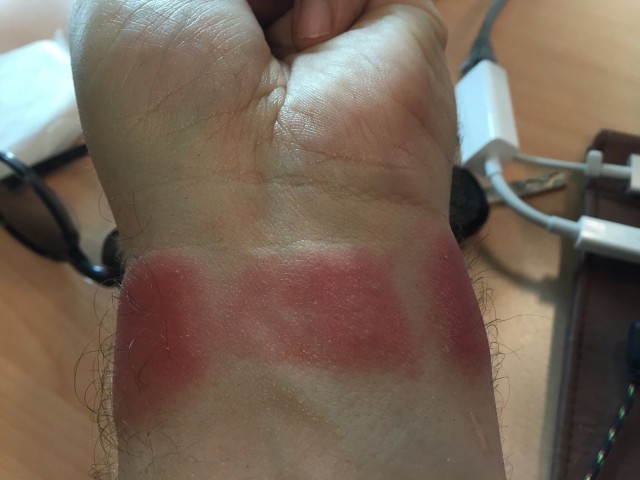 If you’re breaking out underneath your Apple Watch, Fitbit, or another wearable, some advice has emerged that might help you out.

First, make sure you have a good fit. If the band is too loose, it could rub up against your skin and cause irritation. If it’s too loose, it’s easier for irritants to get trapped underneath and create problems.

And while these things are ostensibly designed for constant use, be sure to take them off every once in a while. You want both your wearable and your skin to be as clean and dry as possible. So even though your Apple Watch can survive a shower, don’t wear it in there. It’s not a good idea to trap moisture underneath there.

We’ve seen a few sporadic reports of overheating, like in the “laser burn” pictures above, and those are likely due to faulty hardware. We hope that if those claims are true, Apple will handle them appropriately, but we have no tips for those users other than taking the thing off and reporting the issue to get a replacement.

If you want more information on what’s in your Apple Watch and how to safely clean it to hopefully avoid some of these problems, check out this guide on Apple’s website.