The launch of the original iPhone and the first Apple Watch have been polar opposites. While the iPhone was available at Apple Stores and third-parties on launch day, getting your hands on an Apple Watch on April 24th was almost impossible.

According to researchers at Morgan Stanley, that’s because the Apple Watch is in even more demand than the original iPhone weeks after it launched in 2007. 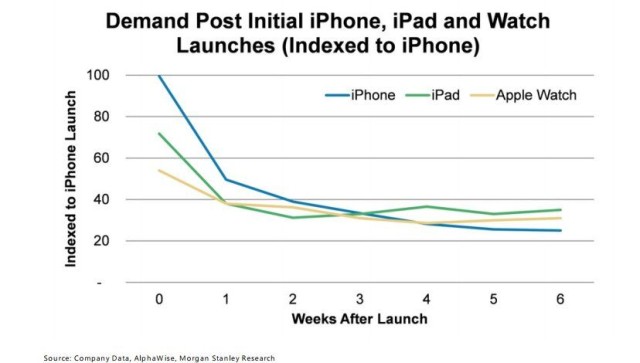 Original Apple Watch demand was actually lower than that of the iPhone. Other surveys have concluded that even the iPod is more popular right now that the Apple Watch, but it may just be a matter of time before it captures the throne as the most popular Apple device, if the trajectory of the original iPhone holds any clues.

The Apple Watch launched in late April but people are still eager to get their hands on it according to Morgan Stanley. That could be related to the limited supplies that were available at launch, where as the iPhone was available at Apple Stores and AT&T retail locations when it launched on June 29th 2007.