Cable boxes couldn’t be hooked up fast enough in August of 1981. People said I want my MTV.

Music videos blew our minds as we watched for hours on end a steady rotation of our favorite rock and pop stars who not only sang their music, but became characters in an elaborate, often hyper-sexualized narrative with a backdrop of visual effects and exotic locations.

But a version of what became the music video craze nearly seduced Americans in the 1960s with the Scopitone, a jukebox topped with a large screen that played short Technicolor films of singers performing on a crazy set that often included bikini-clad dancers. 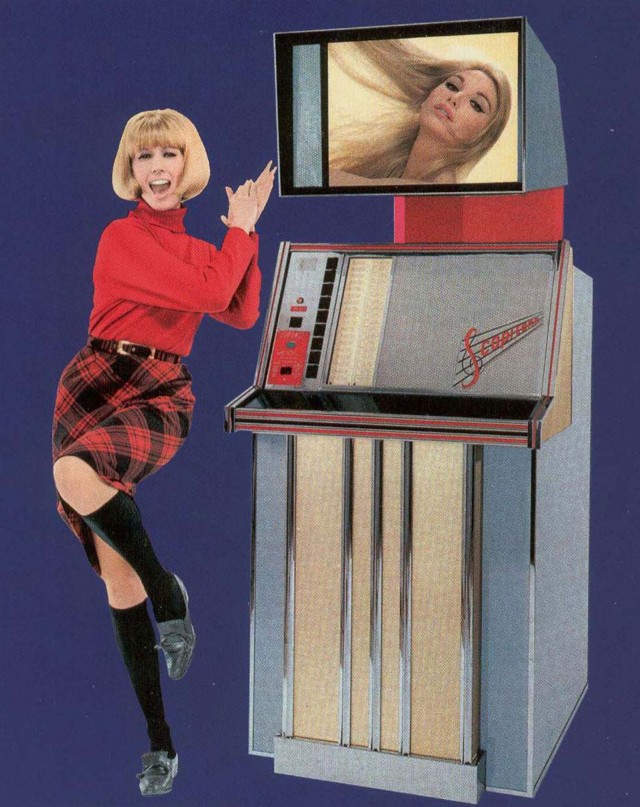 The Scopitone’s success was short-lived while the wildly popular MTV doesn’t even play music videos anymore. Today, we carry our music with us, listening to digital files on earbuds connected to our iPhone or iPad. Occasionally, we’ll pull up a music video of our choice on YouTube.

Scopitone machines were far from portable. It was about seven feet tall and had a large screen, small by today’s TV screens, that would glow with vibrant colors, especially in a dimly lit lounge, said Bob Orlowsky a historian who has built an archive of the 16 mm films that filled Scopitone machines.

“If you look back at the press, there was just tons of excitement,” Orlowsky told Cult of Mac. “People viewed it as this new medium of entertainment. The films are glamorous, crazy and wildly inventive visually. It should’ve been a hit.”

Initial interest suggested Scopitone was a big hit. It launched in France in 1961 as that country was experiencing its own brand of a rock-and-roll revolution. The new music was popular with French youth and Scopitone began making films of the county’s rising stars.

In addition to loving the music, the French were enthralled with the color films largely because color television was not available. There were more than 5,000 machines in clubs and cafes around France.

In 1964, Scopitone came to America and first debuted with a couple of machines in New York City. They weren’t very popular because the machines played the French films.

An investment group, led by the actress Debbie Reynolds, began backing Technicolor films of American acts and over a three-year period, there were about 715 machines in the U.S.

Orlowsky said there are a number of reasons why the machines never captured nothing more than a passing fascination in the U.S. Tone-def executives failed to see the cultural revolution unfolding. Rather than play a part in the rebellious spirit of rock and roll, Scopitone tried to appeal to mostly middle-aged white men.

“Scopitone was on the wrong side of the cultural divide,” Orlowsky said. “They placed their money on men and standards and acts that were going rapidly out of fashion.” 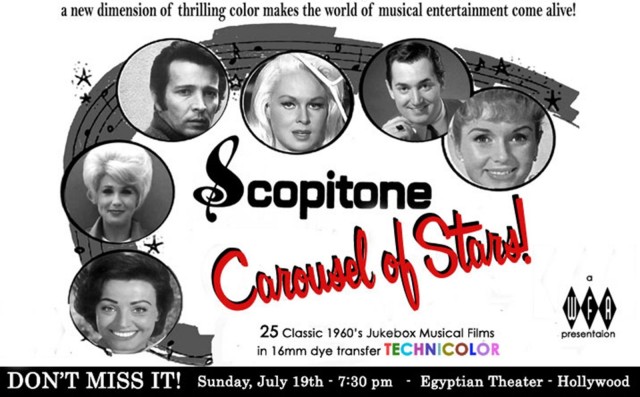 To understand Orlowsky’s point, search YouTube, where you will find many of the 72 Scopitone films that were made for U.S. machines plus some of the French films. Rich in color, yes, but the films were pure kitsch that clearly had no budget for fabric as illustrated by scantily clad dancers in several of the films.

Neal Sedaka sang Calendar Girl with each month of the year represented by a preening model. Sedaka appears in several different outfits in the two-and-a-half minute video and the models do this little hip-swaying, hop-step dance number that shows the money was spent on costumes and not decent choreography.

For cheese and a good laugh, check out Joi Lansing’s The Web of Love. The spartanly dressed bleach-blonde seductively sings from, of course, a large web, except when she is being cooked in a cauldron by a witch doctor or being preyed on by a man dressed as a slithering snake.

The small inventory of films meant people grew tired of seeing repeat performances. The machines often needed maintenance, which was hard to come by in more remote areas, and when the Scopitone came up in a federal investigation into organized crime, orders for machines dried up.

Today, there are a few collectors with working machines. The Museum of Modern Art has a near-mint Scopitone it currently plays for an hour on Friday evenings as part of its Making Music Modern exhibit.

Orlowsky will present a talk about the Scopitone at MOMA on June 26.

He does not have a machine. He collects the films and can play them on a 16 mm projector with magnetic sound. He would like one, but given his Washington D.C. home is small, he doesn’t see it as a practical investment.

“It would be a huge amount of fun to have one but it would be a pain in the ass,” he said. “They are really heavy machines. It would be like having a jumbo refrigerator that only serves Tab.”

But if you miss the taste of Tab, you may find the Scopitone experience kind of refreshing.