On Sept. 20, Apple opened its North County store in Escondido, a San Diego suburb. Reader Scott Bernard writes in to let us know that the event had a very special guest: a quite convincing “PC” impersonator who posed for pictures with the gathered Mac faithful as he distributed “Mac Unfair to PC” leaflets.

Not everyone got the joke. Notes Scott:

We couldn’t hear much of what he was saying, because there was one of those actual CRAZY Apple people in line behind us, yelling in the direction of PC. Crazy guy had NO IDEA that PC was an actor, and he was apparently completely unfamiliar with the “I’m a Mac” ads. Scraped from my week old memory:

*everyone in line ignores crazy guy, who we thought was just trying (and failing) to be funny*

*we start wondering if this guy is crazy, because he actually sounds angry now*

*now we all KNOW he is crazy, especially since it was MICHAEL Dell who he is apparently trying to refer to*

As Scott notes, he doesn’t have the exchange on video, largely because the iPhone has no video recording capability. You hear that, Apple? Think of what you’re denying your base!

Apple also recently opened a shop in nearby Carlsbad, but PC didn’t make the trip. Apparently, lovers of sensible ties and cheap hucksterism prefer Escondido. Click through for a shot of the North County T-Shirt and another pic of PC on duty. 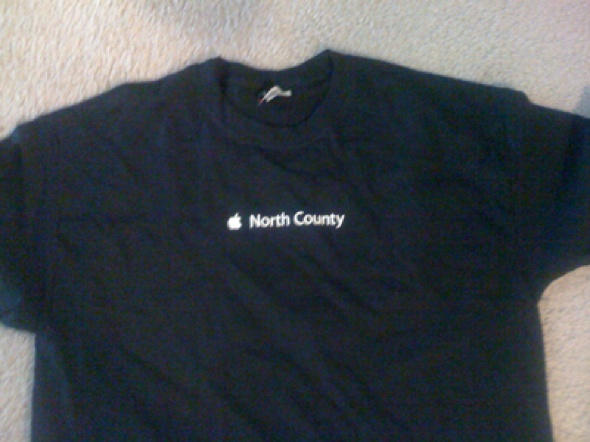 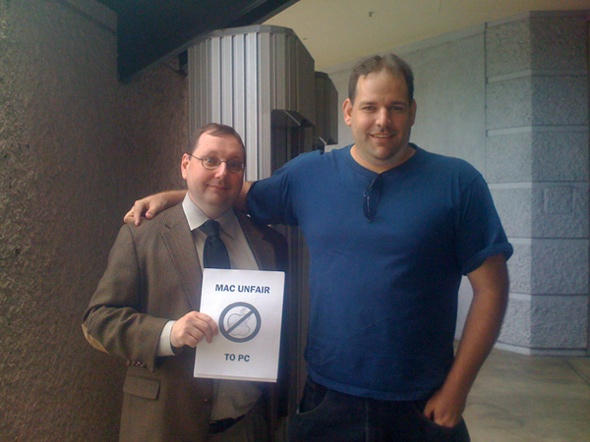