Here’s hoping that Apple’s feverishly-anticipated “Brick” project is the world’s first all-screen laptop — like this mockup of the OLPC version 2 by designer Yves Behar.

There’s slim chance, of course, but I for one would love a computing device like this: A hybrid iPhone-meets-Macbook-Air that would put hot netbooks like the EeePC to shame.

Apple’s “Brick” would be a hybrid laptop/tablet/ebook that dispenses with a physical keyboard and trackpad in favor of a virtual, adaptive UI that blends multitouch, gestures and its own orientation to switch between different modes:

Laptop — When the Brick is held horizontally with the two screens at an angle, the bottom screen turns into a virtual keyboard and touchpad. There’s no tactile feedback for touch typists, but never mind, corrective text handily makes up for the myriad errors. The top screen acts like a regular laptop screen, except that it also is touch sensitive, and is responsive to multitouch gestures like double-tap to zoom, pinching and scrolling.

Tablet — When the two halves are opened fully they snap together in the middle to make a tablet with a continuous touch-sensitive screen. This mode is best for surfing the web, browsing and editing photos, and displaying mind-altering music visualizers.

eBook — Like laptop mode but held vertically. Each screen transforms into an electronic page for easy reading. Displays eBooks, eMags or specially laid out websites. Readers navigate by swiping the screen to turn the pages.

Tabletop — Like tablet mode but for two people. When an onscreen button is pushed, the screens are oriented for two users sitting opposite each other. Great for collaborative tasks and especially games.

And why’s it called “Brick”? Because it smashes Windows! 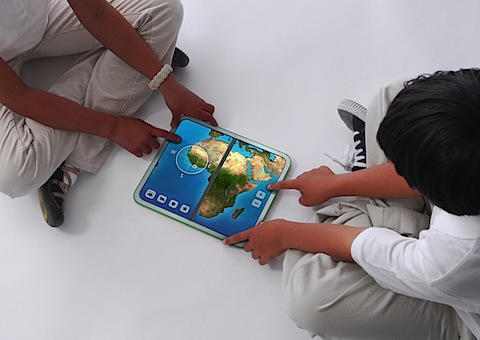 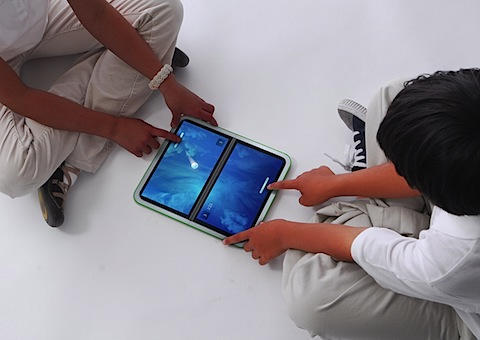 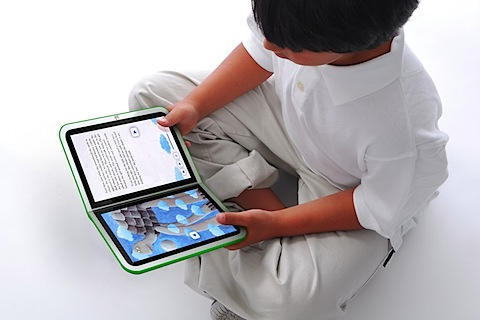