Mad Max: Fury Road is crushing it, according to spectacular early reviews all over the ‘net. Review aggregator Metacritic has the apocalyptic film pegged at a 91 out of 100 based on 39 reviews and competitor Rotten Tomatoes has its own aggregate hitting the 99/100 mark, based on 133 reviews.

That’s a lot of awesome right there.

The new post-apocalyptic car-fetish reboot comes to theaters this Friday and if the early reviews of the film, written and directed by original Mad Max creator George Miller, are any indication, it’s one hell of a ride.

Let’s take a look at a few of the better reviews to see what all the fuss is about.

RogerEbert.com’s Brian Tallerico calls out George Miller’s genius and experience behind the camera as a big reason why this movie is so great.

“From its very first scenes, “Fury Road” vibrates with the energy of a veteran filmmaker working at the top of his game, pushing us forward without the cheap special effects or paper-thin characters that have so often defined the modern summer blockbuster. Miller hasn’t just returned with a new installment in a money-making franchise. The man who re-wrote the rules of the post-apocalyptic action genre has returned to show a generation of filmmakers how they’ve been stumbling in their attempts to follow in his footsteps.”

Over at the New York Times, A.O. Scott hails the film’s “fast, hectic, relentlessly linear motion,” contrasting this sequel-of-sorts with the bright, branded corporate light of Age of Ultron and praising the analog stunt-work and acting chops of the leads at the same time.

“When Fury Road reaches for emotional grandeur it relies on the faces of its cast — Ms. Theron could be a silent-movie heroine, despite the noise that surrounds her — and on Junkie XL’s superb, full-throated score. When it wants to crack jokes, the movie reaches for quick, profane sight gags or elaborate feats of Newtonian improbability.” 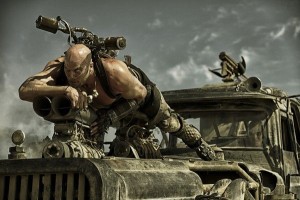 Veteran movie reviewer Kenneth Turan takes to the pages of the LA Times to gush about the greatness of Fury Road, a film that needs very little dialogue to become intriguing.

“Costarring the protean Tom Hardy (re-creating the Max Rockatansky character originated by Mel Gibson) and a shaved-headed Charlize Theron, Fury Road is essentially one nonstop, two-hour chase with the bad guys in constant hot and heavy pursuit of the few good folks left in this scary, derelict and deviant world. If you think that doesn’t sound involving, you haven’t been paying attention.”

“Notably, our engagement doesn’t wane even when Fury Road downshifts into an interlude of tense, close-quarters intimacy, as Max, lone road warrior that he is, must reluctantly endure the company of Furiosa and her five comely refugees. The feminist undercurrents rippling through this movie are by turns sincere, calculated and teasingly tongue-in-cheek: Our first good glimpse of the wives, clad in skimpy white rags and gathered around a water spout, plays like a vision out of ‘Girls Gone Wild: Coed Car Wash.’ Even when they join in the fight, it can be hard to tell where erotic fantasy ends and empowerment fantasy begins, which is very much in keeping with the film’s unapologetically grindhouse attitude.”

As you can see, this film is poised to rake in a ton of money this coming weekend; will you be there to see it?

If the critics above are right, and they usually are (they’re pretty good at their jobs), Mad Max: Fury Road should be worth every dollar you spend on the film to see it on the big screen.

Here’s the trailer to get you even more excited.