Apple’s not exactly hurting for press coverage these days. There was a time, though, when the company was desperate for any bit of publicity it could drum up. That time was February 1977, when The Apple Computer Company spoke to Kilobaud magazine for a multi-page feature article.

I don’t know whether my favorite bit of the resulting article is the crowing about 10 Apple computers selling in three weeks (the iPhone 6 and 6 Plus sold 10 million in their opening weekend) or Steve Jobs not yet mastering the art of selling by admitting the machine “is not for everybody,” but it makes for fun reading nonetheless.

In a brief Business Insider interview with author Sheila (Clarke) Craven, she recalls meeting Jobs and Steve Wozniak, who picked her up for the meeting in a red Chevy Luv Truck.

“Steve Jobs did all the talking. After lunch we drove to his parents home in Palo Alto — never went inside the house — straight to the garage. On a workbench sat a pc board. above the workbench on a shelf sat a TV set where wires dangled from it to the PC board. The whole time Steve Jobs was talking, explaining, outlining future plans for marketing and development, he was just about dancing on his tippy toes in his tennies. The Woz sat at the workbench, initiating the operating system (I suppose) to demonstrate a program. Woz was pretty quiet. I got that he was the engineering brain power, and Jobs was the idea guy.

One of the things Jobs told me was that they would make certain there would be an Apple in every classroom and on every desk, because if kids grew up using and knowing the Apple, they would continue to buy Apples and so would their kids. The computers would be donated by Apple Computer. I understand that when that article came out, orders starting pouring in, and Apple Computer was seriously launched.”

The complete article is reproduced below — although be warned that it can be a bit densely technical for anyone who wasn’t spending the late ’70s salivating over their brand new Altair. 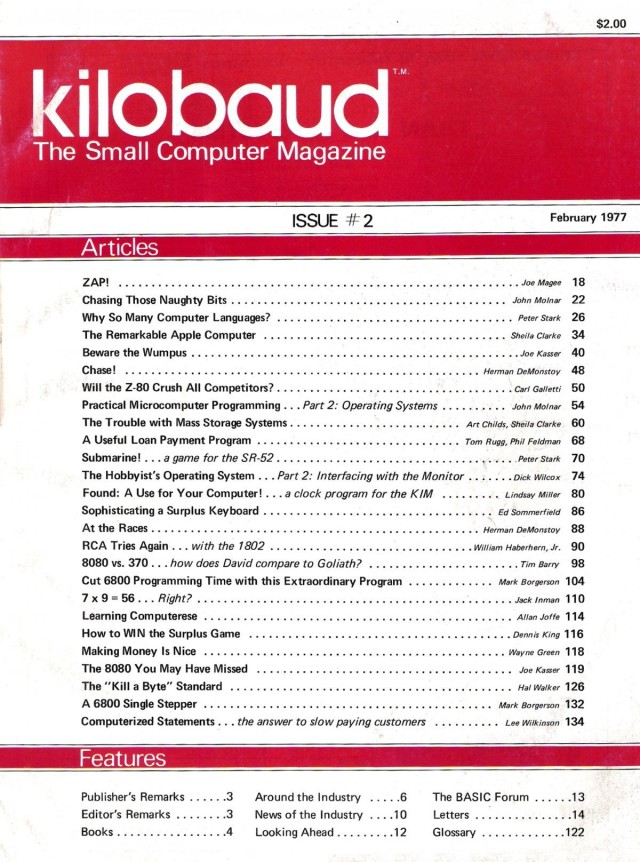 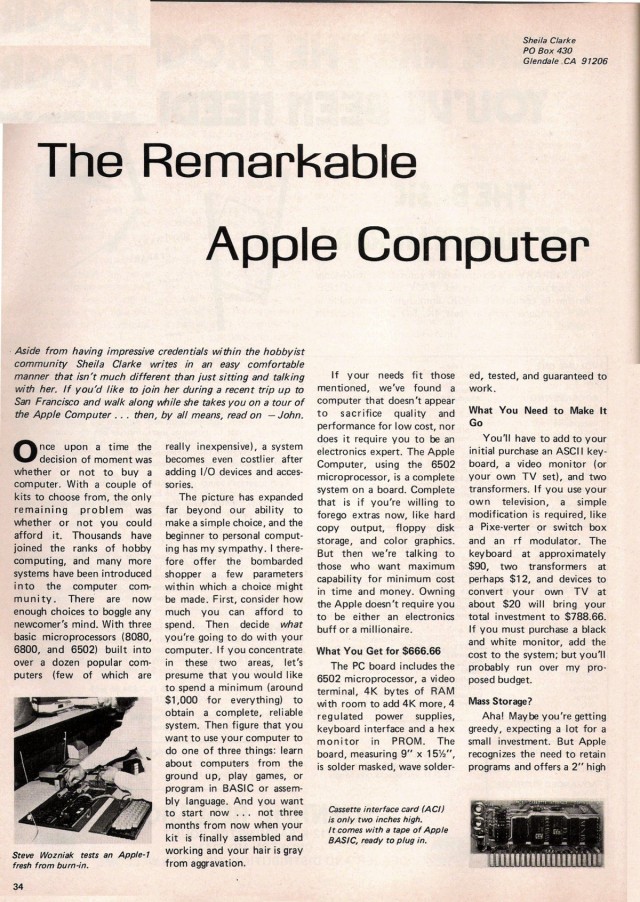 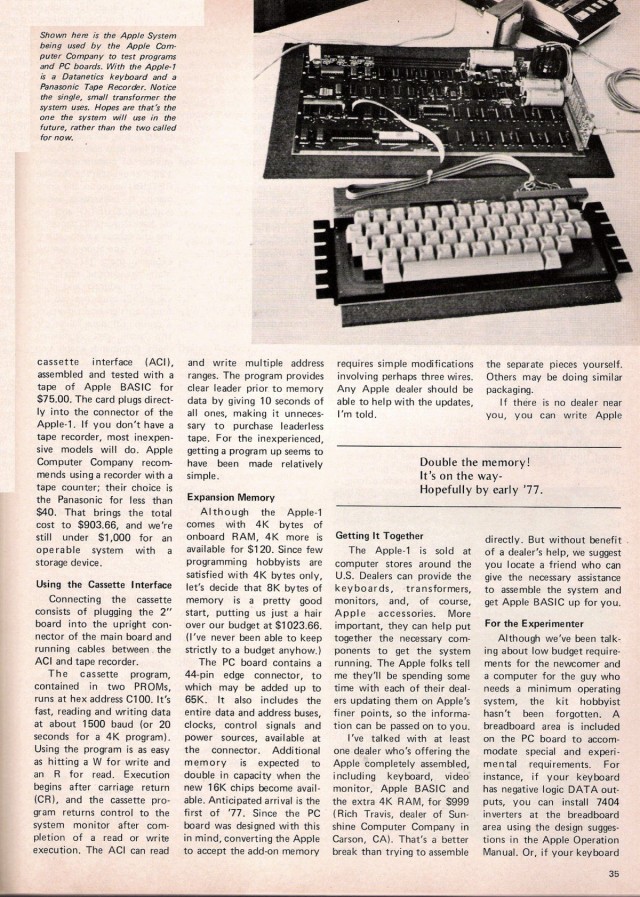 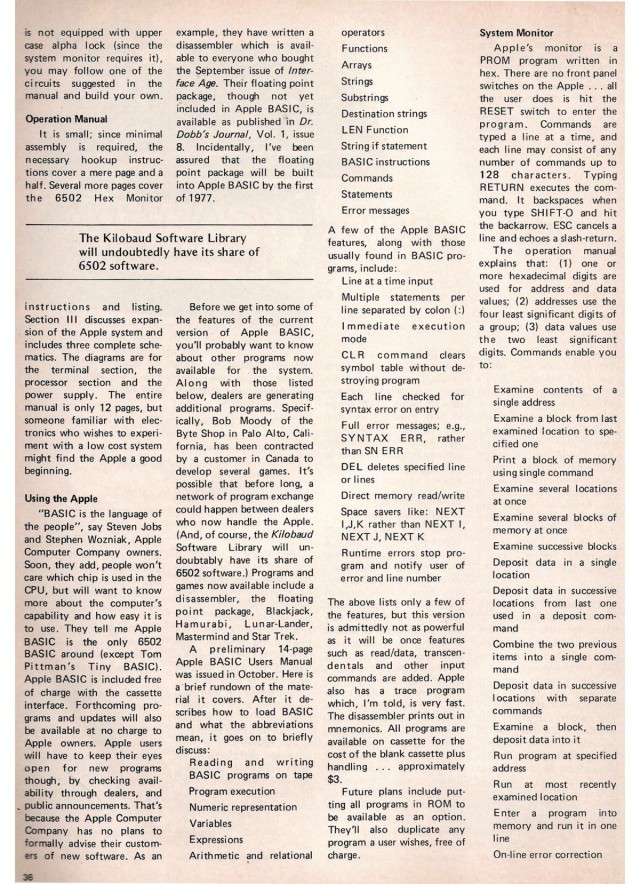 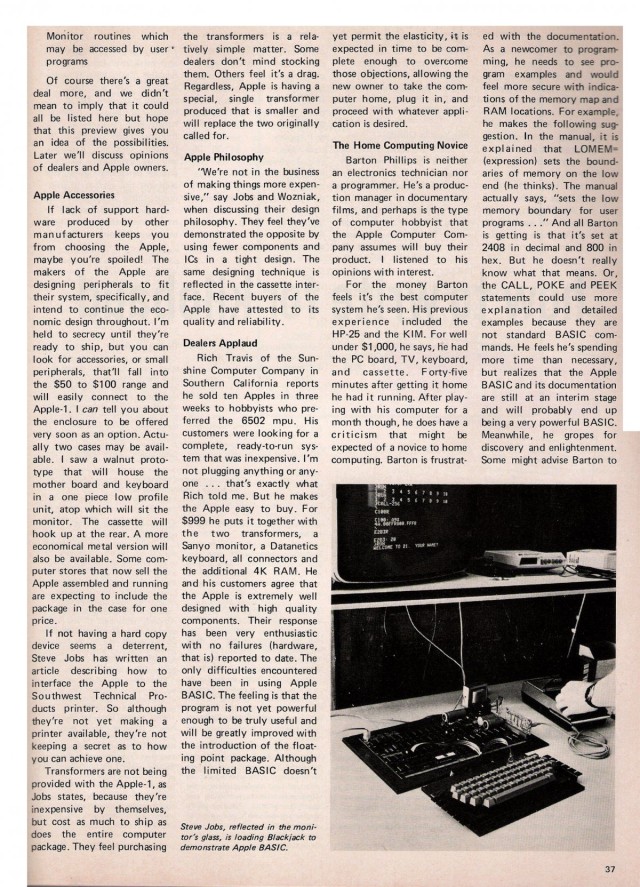