Okay, so all eyes are currently trained on the Apple Watch, which arrives later this month. But April also represents another important benchmark for Apple: five years ago today the iPad went on sale for the very first time.

To celebrate, we’ve scraped the dark recesses of the Cult of Mac archives to bring you a whistle-stop tour of the glorious 60 months we’ve spent in the company of Apple’s breakthrough tablet.

Whether you’re after a zero-gravity Garage Band symphony or a reminder of the time the Queen of England bought an iPad 2, keep reading for a trip down memory lane.

Remember this Economist cover? Following the announcement of the iPad in January 2010, the above cover story drew on religious imagery to argue that the iPad would shake up not just one industry, but three — computing, telecoms and media.

The religious imagery was over-the-top, but the point about Apple’s disruptive powers wasn’t wrong.

Isn’t it crazy how fast tech moves? Just five years ago, using an iPad in a public space without wanting to be disturbed was a virtual impossibility: everyone wanted to come and take a look at it. “If you’re looking for a dating aid, leave your friend’s dog alone and borrow an iPad,” wrote Jim Colgan on his blog.

Get ready for a similar response to the Apple Watch come April 24, even if its smaller size means it’s not going to be so immediately noticeable.

Not long after the iPad first arrived, virtuoso pianist Lang Lang prompted a massive round of applause when he busted out Rimsky-Korsakov’s “The Flight of the Bumblebee” on his brand new iPad using Smule’s Magic Piano iPad app, during a San Francisco concert.

Displays like this demonstrated just how versatile the iPad really was.

The iPad 2 offered a speed bump, rear and front facing webcams, a new gyroscope, thinner form factor, and both black and white color options. Apple announced that more than 15 million iPads had so far been sold.

2011 was the year Apple’s tablet received the royal stamp of approval, when Queen Elizabeth II sent off one of her staff to the U.K.’s Regent Street Apple Store to pick up an iPad 2.

“The Queen has a mobile phone as well as the iPods, so an iPad is the logical progression,” a source told British tabloid newspaper The Sun. “She thinks it will be great to keep her entertained on all the long trips she has to make.”

Following Steve Jobs death in late 2011, the third-generation iPad was the first of Apple’s tablets to be introduced by Tim Cook. “We’ve taken it to a whole new level, and we are redefining the category that Apple created with the original iPad,” Cook said. “It makes amazing improvements on the most fundamental features.”

Among the improvements was the new 9.7-inch Retina Display, offering more than 1 million pixels as Apple was quick to brag. 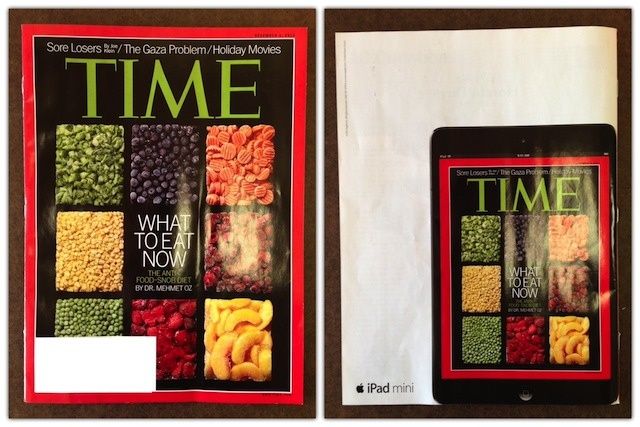 Just seven months after the iPad 3, Apple unleashed the shrunken-down iPad mini on the market. Super-thin, amazingly light, and with phenomenal battery life, users sacrificed the Retina Display and performance of Apple’s previous tablet, but gained so much more. Or less, depending on how literally you take it.

Oh, and the above Time magazine ad remains one of the smartest Apple ads I can recall.

Apple also released its fourth-gen iPad at the same time.

Late 2013 saw two new iPads arrive: the super-slim iPad Air and Retina iPad mini, both sporting Apple’s 64-bit A7 chips. At the same event, Apple revealed that more than 1 million iOS apps were now available, with more than 475,000 native iPad apps among them.

A few years after the Queen bought her first iPad, we now know that the future King of England, Prince George, also loves his iPad. During a trip to the United States, Prince William told the CEO of tech company littleBits that his son loves playing iPad games, and that Apple’s tablet is a “good way to teach him the inner workings of electronics.”

It seems plenty of other youngsters feel as Prince George does too: the same year that Apple announced the iPad Air 2 and iPad mini 3, a survey saw the iPad beat out 255 other brands (including Disney, Nickelodeon, Toys”R”Us, McDonald’s and YouTube) to be named the #1 brand among children aged 6-12.