Apple snuck a major new emoji feature into its first iOS 8.3 beta, and we’re not talking about the racially diverse kind. Along with the new skin-tones for emoji added last week, Apple has included a potentially big feature with the new emoji keyboard that lets users deconstruct some emoji to discover their emoji combos.

By tapping backspace on emoji like KISS (man, man), users can reveal the combination of two or three emoji that represent the original emoji selected. The feature only works on some of the kissing and couple emoji, but it could be expanded to include more in the future.

Here are the different combos you can unlock: 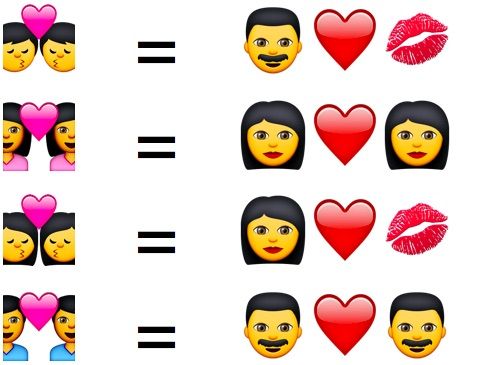 How useful this will actually be to emoji-addicts still isn’t clear. We’ve found that the feature only works on four of the new same sex couple emoji added in iOS 8.3, so it could possibly just be a bug with the keyboard. However, after being introduced to the idea of Ligature emoji this morning, we wouldn’t mind if Apple let us multiple and divide our pictograms at will.

Number of comments on this postLeave a comment
Posted in: News Tagged: emoji