That’s how big Apple’s target market (the money it could potentially make if it had no competitors) could be by 2020, according to the latest estimates from Morgan Stanley’s Katy Huberty. Apple’s current target market is only $800 billion. Huberty’s projections show that the Apple car could be the biggest money maker Apple’s ever known, adding up to $1.6 trillion of value to the company.

Take a look at the mind boggling numbers Apple could add to its bottomline in these markets: 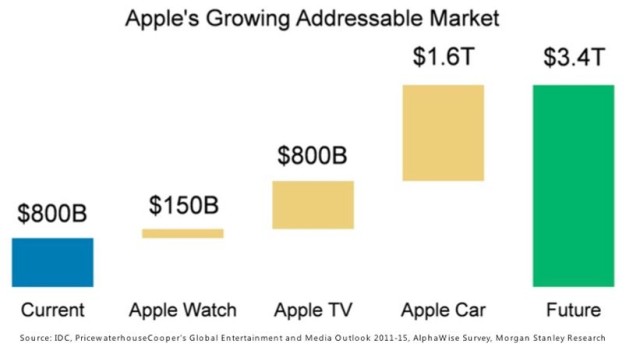 These numbers are basically how much Apple could currently make in these markets if it had zero competition. Apple already scoops up more than 90% of the smartphone industry’s profit, so it’s not completely insane to think the company could be worth more than $3 trillion by adding an electric car.

Morgan Stanley has raised its target price on Apple from $133 to $160 over the next 12-months — still much lower than the $216 Carl Icahn values the stock.