From minor controversies like Antennagate to being kicked out of his own company and then returning triumphantly, Steve Jobs got out of plenty of tight squeezes in his life.

Now that he’s gone, it seems that that same spirit of near-misses and daring triumphs is left to Venus, Jobs’ 256-foot, $120 million super-yacht.

Having visited Montenegro, Palma, Gibraltar, Horta Azores and many other exotic locations since Jobs’ death in 2011, the yacht recently had a close call while passing through a bridge in Saint Martin, an island in the northeast Caribbean, approximately 185 miles east of Puerto Rico.

Check out the video after the jump.

The footage was captured by a drone piloted by Brian Muston. It shows the yacht barely squeezing past the Simpson Bay Bridge, which provides an entrance and exit to one of the Caribbean’s largest sheltered lagoons.

Given the vessel’s oddly bulky design and nine-figure price tag, it makes for uncomfortable viewing, and no doubt a tense few minutes for those on board.

Despite playing a key role in its creation, Jobs himself never got a chance to use the yacht. He began working on it around 2008, shortly before his liver transplant. The vessel was created by French designer Philippe Starck, with glass designed by the chief designer of the Apple Stores, but was only unveiled after the Apple CEO’s death. On board, a row of 27-inch iMacs are used to control the ship from its wheelhouse. 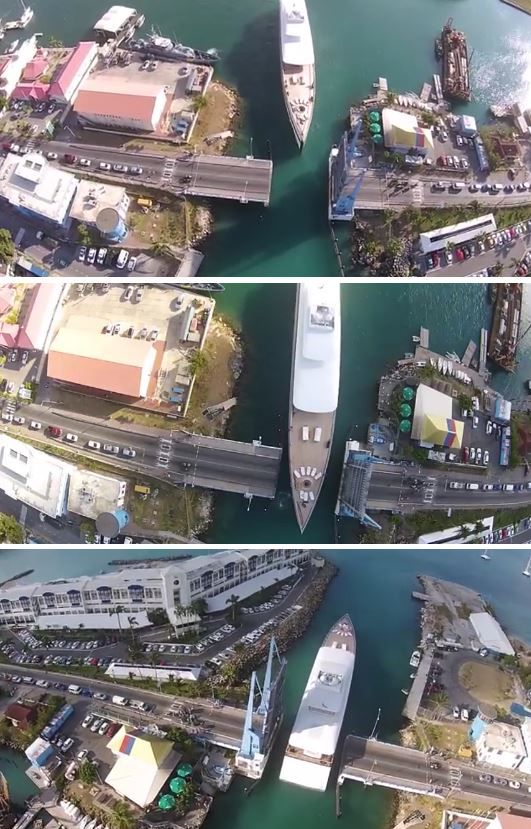