Shot recently by a local realtor, the footage shows a massive facility the size of a shopping mall.

Experts note that Apple’s data center will be among the largest in the world, rivaling centers run by internet giants like Microsoft and Google. The unusual size of the data center suggests that Apple is investing heavily in cloud computing. At 500-000 square feet, the facility is five-times the size of Apple’s West Coast center in Newark, Calif.

Apple has said little about the complex, except that it’ll be its east coast data hub.

The aerial footage after the jump:

A reader who visited the area describes the complex as “massive.” In an email to CoM, the reader says:

“All that I can say is that to the east of NC 321 a few miles north of Lincolnton, NC, are two MASSIVE buildings near the (no kidding this is the community’s name) Startown Road exit. These buildings are so large at first I though that they were a new mall or shopping center! Then I realized that this must be the secret Apple facility that my family was talking about over my X-Mas visit.” 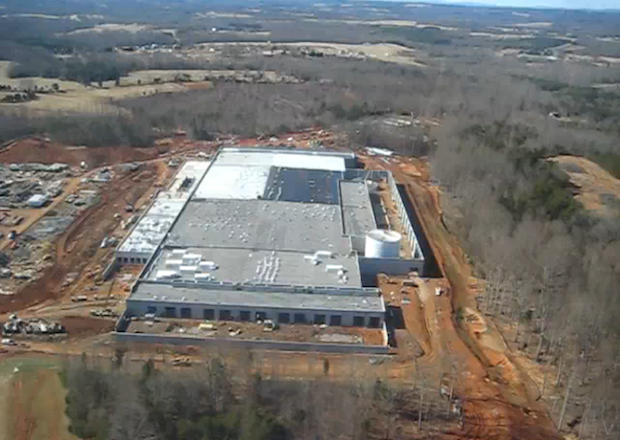 But from the aerial footage, it looks like the data center is closer to 6204 Startown Road, Maiden, NC. Unfortunately, both Street View and satellite imagery show empty fields.