Hollywood has long been the sparkling gem of entertainment in the U.S., but when it comes to making money, Apple is schooling the entertainment industry on how to bring in the cash with the App Store.

Apple paid out approximately $25 billion total to developers, which means that not only is the App industry healthier than Hollywood, but also on an individual level, some developers are out earning Hollywood stars. The median income for developers is also likely higher than the median income for actors. If you’re looking to strike it rich, forget becoming the next Brad Pitt. Be the next Dong Nguyen. 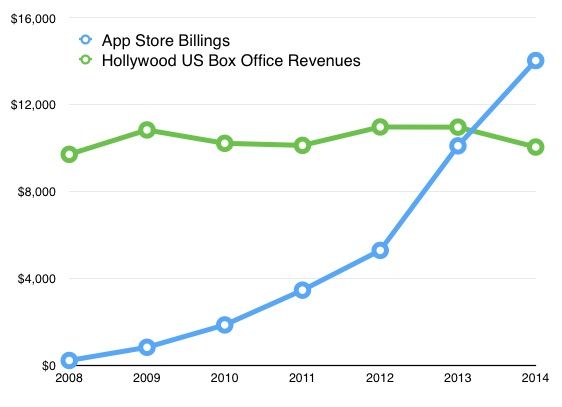 The scary thing for Hollywood is the App Store is still growing fast. Apple announced that customers spent $500 million on apps the first week of January. Billings increased by 50% in 2014, and the $10 billion paid out to developers last year represented 40% of all app sales since 2008. I doubt Apple ever predicted apps would become this successful, especially considering Steve Jobs didn’t even want them on the iPhone to begin with.