We still don’t have a launch date for Apple Watch, but if you can’t wait to line up at Apple Stores for Jony Ive’s timepiece, you can do the next best thing and buy a knockoff.

Earlier this morning, an eBay listing for a “prototype Apple Watch” sold in just hours for $260. The seller claims it’s an Apple prototype obtained from a cousin who works at Apple, but the sticker on the front and cheap leather band give it away as an obvious fake.

Here’s a look at the listing: 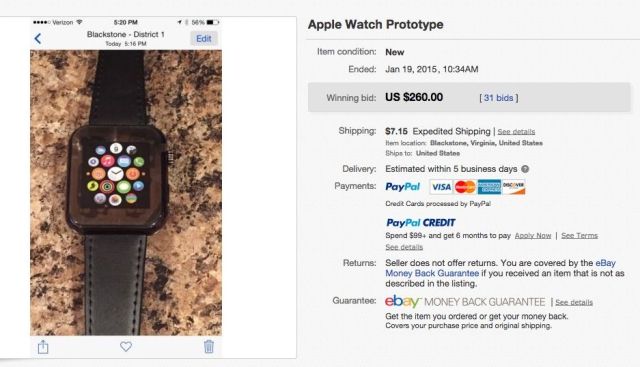 We saw a ton of fake Apple Watches at International CES in the trade show’s Shenzhen section, so we doubt this will be the last fake Apple Watch that goes on eBay before the real deal finally hits stores. You can already get a number of crappy Android smartwatch knockoffs on eBay. Instead of buying one there, though, you could just go straight to the merchants peddling Apple Watch knockoffs on Alibaba.

If you’re looking for something a little more vintage, you can also scoop up the original Apple Watch we saw in a video this morning for just $201.50.