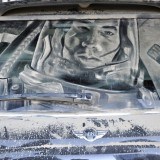 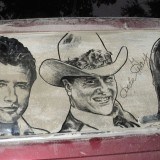 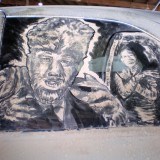 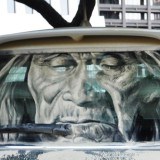 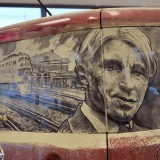 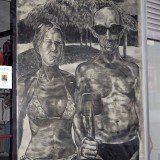 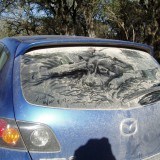 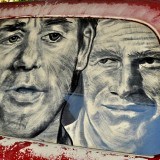 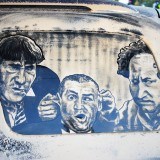 He is an Eagle Scout, a versatile bar-band drummer and a senior GUI designer for a company that creates mobile apps for the health care industry.

But Scott Wade is famous for drawing dirty pictures.

It’s not the content that raises eyebrows but the canvas on which Wade creates. Present him with a dirty car and see why some call him the “da Vinci of Dust.”

Who hasn’t walked by a car coated in dirt and used their finger to scrawl the message, “Wash me”? Wade, inspired by the dirt roads of his home state of Texas, uses a car’s dirty window as an opportunity to create elaborate landscapes, detailed portraiture with subtle shading and re-imagined classic works like The Mona Lisa or Van Gogh’s Starry Night.

The first rain eventually washes it all away but that’s the point for Wade, who sees his temporary work as a good life lesson for living in the moment.

“I have the most fun when I am in public. It’s not supposed to be beautiful — you’re supposed to wash it,” said Wade, 55, who lives in a small town between Austin and San Antonio, Texas. “But when you turn it into a piece of art, people are delighted by that.”

How delighted? Consider that in the 10 years he has been manipulating dirt on glass, Wade has demonstrated his dirty car art before large crowds in Istanbul, Mexico City, Madrid, Lisbon, Canada and all over the United States. Organizers of car shows and corporate events book Wade about a dozen times a year.

Wade would draw on his own car regularly, then the dirty cars of friends and neighbors on request. A story about the work in his local newspaper went viral and the requests to stage his creative endeavors as performance art rolled in.

The art lives on electronically, in photos and videos he posts on his Dirty Car Art website. He animated one dirty car window for a music video. A business owner in Austin, who gave Wade free rein on a store-front window, now refuses to wash away the art. It remains intact after three years.

Wade, who designs apps for AirStrip in San Antonio, said creating with dirt is a little like sketching with charcoal, where the soft, black, willowy sticks applied to white paper creates a rich contrast. With dirt on a car, removing minute layers to reveal the dark interior of the car provides the contrast.

He started by using his finger to make simple but goofy faces. One day while chewing on a popsicle stick, he thought to use the chewed, frayed end to create a new kind of line. It worked like a brush, and soon Wade was raiding his collection of paintbrushes to use on dirt.

A natural canvas — meaning the buildup of dirt and dust from driving — needs time and miles to create the ideal conditions for drawing. When Wade lived down a mile-and-a-half-long dirt road, he could build up several layers, with each getting baked onto the glass with that uniquely hot Texas sun.

But as the requests to perform rolled in, Wade had to find a way to ensure a properly dirty car for each event. He turned to Hollywood, where set designers favored a limestone substance that is pulverized and sifted into a fine powder. With a thin layer of oil and a hair dryer to blow the dust onto the surface, Wade found he could create a canvas for his road shows.

Still, he prefers a natural canvas and his retirement plan includes traveling across the country to create works with dirt native to various regions. Whenever he travels, Wade likes to create images that celebrate the territory — a portrait of poet Carl Sandburg while in Illinois, a skyline with the CN Tower in Toronto. On a quick trip to Houston in 2012, he created the familiar face of Tom Hanks from Apollo 13 where the actor channels astronaut Jim Lovell in saying, “Houston, we have a problem.”

Wade is also on the lookout for a skyscraper with an owner willing to turn over a building side for his art.

“I’ve been doing work of all kinds for years, murals, designing menus for restaurants and my friends are just astounded that this is the thing that got me some fame,” Wade said.