The AR.Drone feels like the future of video games. A combination of a flying, hovering, and downright smart helicopter with four rotors and lots of sensors, and an iPhone augmented reality app, the Drone allows gamers to see the world through cameras on the chopper, to augmentedly dogfight with friends, and even to attack robots that only they can see. Basically, it was the hit of CES, and it shows an entire class of games that the iPhone makes possible.

On Friday, the AR.Drone from Parrot took the stage at the venerable TED Conference in Long Beach alongside everyone from Bill Gates and complexity theory genius Benoit Mandelbrot to Andrew Bird and Sarah Silverman. But before then, the little helicopter from the future hit northern California, making a cameo at MacWorld and, in a stroke of luck, briefly landing in my control on Thursday. And I came away more impressed by the actual device than I had been by video and demos of it.

On its surface, the AR.Drone is a high-tech, pricey toy (no final word, but it should be “under $500” — up to $800 with an iPhone, in other words). But that’s OK — it’s a really, really fun pricey toy. The Drone is a very impressive piece of hardware, featuring four electric motors, ultrasonic sensors, an accelerometer, a solid state gyroscope, a partial carbon-fiber frame, and an integrated WiFi hub. Basically, you turn it on, connect your iPhone to the WiFi network it generates, and away you go.* It’s that easy. 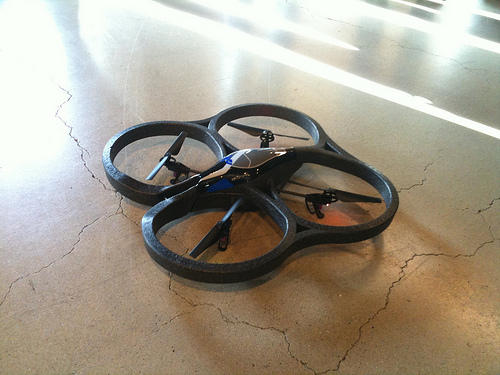 Moreover, it has the potential to be less a single product than it does a platform for many games (all of them involving choppers, of course). The current flying app, which basically gives you real-time video feed from the nose or underside of the Drone, is quite good. The controls are intuitive, allowing you to steer, lift, and land with either virtual buttons or a free-ranging accelerometer mode. The visual effects overlay is clean. It’s really a pretty involving experience, and very easy to pick up (the fact that it’s really good at self-correcting itself after collisions helps, I should note).

But as nice as that application is, think of the possibilities. Parrot’s sending developer kits out to find new applications, and people can pretty much create any application they want for it. Anything that works over WiFi could control it, so you could use virtually any interface, from a Nintendo DS to a desktop computer. Second, what the user sees is entirely up for transformation. You can have all kinds of missions and characters to fight against, but you could also use graphic filters to change the experience. I’m hoping to see a version of “Rescue Copter” using retro black-and-white Mac graphics overlaid on the live video feed. Or you could do an “Avatar” game with the immediate environment shot on the camera transformed into lush Pandora. How cool would that be?

All in all, it’s a really interesting bit of emerging game technology that uses the iPhone’s mobile computing possibilities to create a new way to play. It’s not released for ordinary folks yet, but I think it will be worth it when it gets here. And if you’re an interested developer, the line starts here.

*Or, away you might go. Not too surprisingly, the WiFi in the AR.Drone isn’t as strong as some of the industrial-strength routers that blanket Silicon Valley. During my demo with Parrot engineer Bryan Spears, we actually had to hunt for a relatively low radio frequency area to get a signal. That’s really only likely to be an issue in a business-heavy district, but if you run into trouble, linking up in an elevator will solve your problems.