OS X Yosemite is supposed to make Macs run more efficiently than ever, but some early upgraders have discovered a huge memory leak that causes memory pressure to skyrocket and productivity to drop.

The updated Mail app appears to be the culprit of the memory leak that is triggered whenever multiple files are dragged into an email to be added as attachments. Over 100 hundred users have confirmed the memory leak on Apple’s Support forum with screenshots of Mail hogging up to 24GB of RAM. 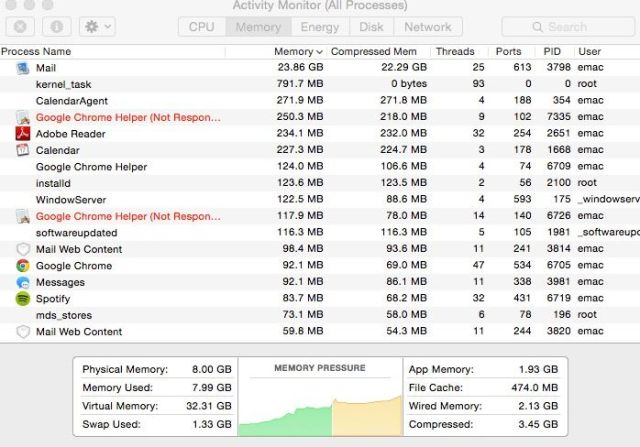 It takes the Mail app only a few of seconds to eat up all the free RAM on the Mac. Once the memory leak bug effects your Mac the only way to recover is by opening Activity Monitor to Force Quit the Mail app, as the normal quit doesn’t work.

Based on reports from a number of Apple Forum users, the bug appears to effect Mac Minis, iMacs, and MacBooks. Apple support reps have suggested third-party extensions are the culprit, but most users are still affected by the memory leak after disabling extensions.

We’ve reached out to Apple for more information on whether the Mail app is truly to blame for the memory leak, but haven’t received a response yet.

Number of comments on this postLeave a comment
Posted in: News Tagged: Mail, OS X Yosemite